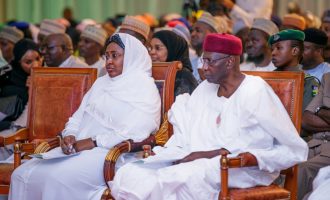 Aisha, wife of President Muhammadu Buhari, on Monday hosted Muslim religious leaders for special prayer session.The event, which held at Aso Rock, had in attendance, top government functionaries such as ministers and public servants.Mohammed Adamu, inspector-general of police; Tanko Al-Makura, senator representing Nasarawa south; Rauf Aregbesola, minister of interior; and Abba Kyari, chief of staff to the president, were in [...] 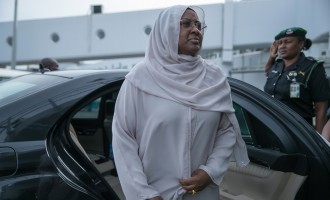 Fatima, daughter of Mamman Daura, President Muhammadu Buhari's nephew, has accused the wife of the president of attacking her inside the presidential villa in Abuja.Commenting on a video where the first lady was seen complaining about being denied access to her apartment, Fatima said she least expected Buhari's wife to act in a violent manner.In the video which trended on [...] 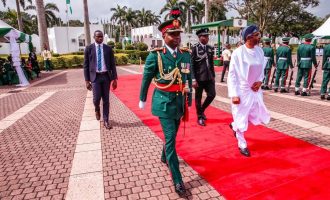 Social media is currently abuzz over an object underneath the attire Femi Gbajabiamila, speaker of the house of representatives, wore to the Independence Day parade at Aso Rock.Adorning a white "agbada" with blue cap, Nigeria's number four man inspected the parade after Senate President Ahmad Lawan had done so.Beside Gbajabiamila was a top-ranking soldier while a police officer stood behind [...] 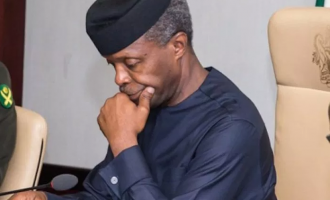 The Movement for the Actualisation of the Sovereign State of Biafra (MASSOB) says the cabal in the presidential villa are frustrating Vice-President Yemi Osinbajo.Uchenna Madu, MASSOB leader, said this in a statement issued in Awka, Anambra state, on Sunday.He said the silence of President Muhammadu Buhari to the alleged frustration of Osinbajo by the cabal in the presidential villa is [...] 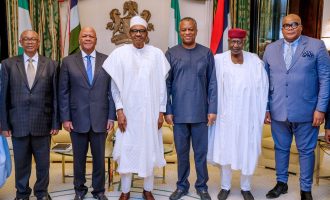 President Muhammdu Buhari on Monday received a delegation from President Cyril Ramaphosa at the presidential villa in Abuja.The Nigerian leader had earlier sent a special envoy to his South African counterpart over the attacks on Nigerians.Jeff Radebe, who led the team, tendered an apology to Nigeria on behalf of the government and people of South Africa.Radebe apologised for what he [...] 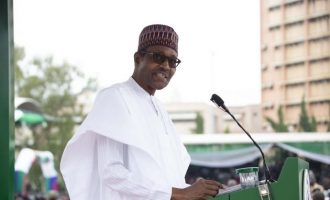 President Muhammadu Buhari has assured Nigerians that his administration will not inflict additional hardship on them.Speaking when Quadri Olaleye, president of the Trade Union Congress, led a delegation to Aso Rock on Thursday, Buhari said his government would rather seek ways to ameliorate sufferings and create a more enabling environment for everyone to thrive."On fuel prices, I agree with you on [...] 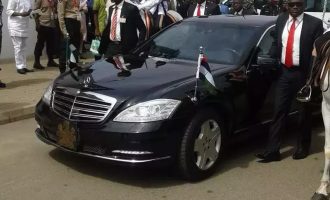 SHOCKER: Aso Rock got N15bn for cars, generators and travels in 10 years

Nigeria’s seat of power got N15 billion for cars, generators and travels between 2010 and 2019.Budget documents analysed by TheCable showed that in those years, a total of N664 million was allocated to generators, while local and international trips gulped N7 billion and cars got N7.32 billion.Within the period that Aso Rock got the huge resources, US-based Brookings Institution rated [...] 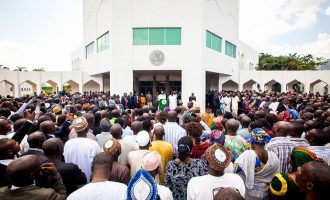 The federal executive council (FEC) has approved the inclusion of the presidential villa in the eligible customer policy to ensure uninterrupted power supply to the villa.In a statement on Friday, Hakeem Bello, special adviser on communications to Babatunde Fashola, minister of power, said the approval is aimed at achieving improvement in the electricity supply and distribution in the country.According to [...] 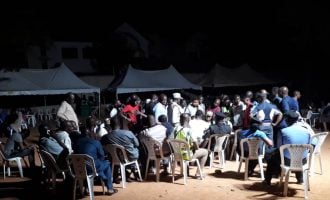 Atiku Abubakar, presidential candidate of the Peoples Democratic Party (PDP), has been announced as winner of the election at polling units at Aso Rock.This was after a recount of votes by officials of the Independent National Electoral Commission (INEC). In the result initially announced, President Muhammadu Buhari lost to Atiku Abubakar, his main rival, by 17 votes.While Atiku got 1,030 [...] 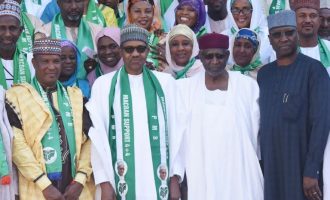 President Muhammadu Buhari received members of Miyetti Allah Cattle Breeders Association of Nigerian (MACBAN) at the presidential villa in Abuja on Friday.The group, which has since declared support for the reelection bid of the president, was led by Muhhamadu Kirowa, its national president.Buhari appealed to the herders to cooperate with his government in bringing lasting peace to the country.The president said [...] 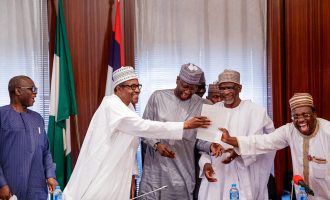 I thought I was never going to recover from the shock of what played out at Aso Rock on Friday when President Muhammadu Buhari was presented with the West African Examination Council (WAEC) “attestation result. The Nigerian seat of power was agog with jubilation and near pomp as cabinet members flocked around the president to rejoice with him over the [...] 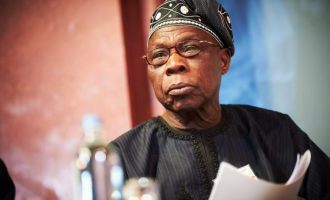 Aso Rock, Nigeria’s seat of power, used ambulances to complement bullion vans when moving cash around during the administration of ex-President Olusegun Obasanjo.The practice was said to have reached its peak in the heat of Obasanjo's quest for a third term, according to a new book titled ‘Too Good to Die: Third Term and the Myth of the Indispensable Man [...] 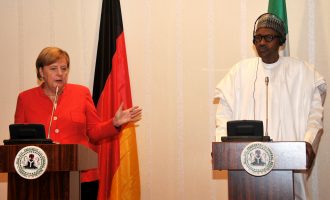 President Muhammadu Buhari on Friday received Angela Merkel, German chancellor, at the presidential villa, Abuja.The German leader, who is concluding her tour of three West African countries, arrived Aso Rock at around 10:02am.Buhari welcomed the chancellor at the fore court of the presidential villa and introduced some members of his cabinet and presidential aides to her.They later went into a meeting.Merkel [...] 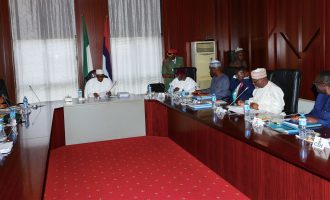 Less than 24 hours after announcing his 10-day holiday to London, President Muhammadu Buhari met with service chiefs at the presidential villa in Abuja.Abba Kyari, chief of staff to the president, and Boss Mustapha, secretary to the government of the federation, attended the meeting.Here are pictures[...] 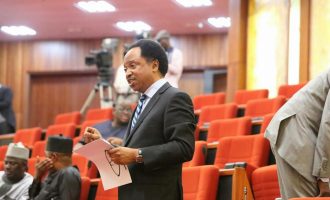 Shehu Sani, senator representing Kaduna central district, says victims of "mindless killings" should be buried in the three arms zone in Abuja.The zone is where the three arms of government — Aso Rock (the presidential seat of power), national assembly and courts — are situated.Commenting via his Twitter handle on Tuesday, the senator said burying the victims "close to the [...]