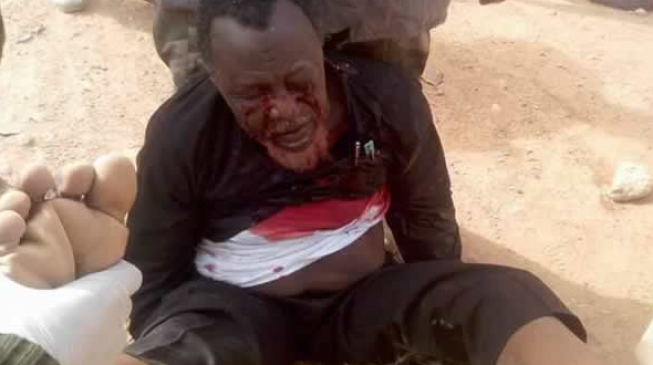 17:07 2017
Print This Article Share it With Friends
👤by Jamilah Nasir  0 Comments
Advertisement

Femi Falana, human rights lawyer, has written another letter to President Muhammadu Buhari over the detention of Ibrahim El-Zakzaky, leader, Islamic Movement in Nigeria (IMN), and Zainab Elzakzaky, his wife.

The lawyer has written a series of letters to the president over the arrest of the IMN leader.

“On December 2, 2016, the Abuja Judicial Division of the Federal High Court ordered the release of Sheik Ibraheem Elzakzaky and his wife, Hajia Zainab Elzakzaky from the illegal custody of the State Security Service,” the letter read.

“The court also awarded them reparation of N50 million and directed the Federal Government to provide a temporary accommodation for the couple since it was established that the Nigerian Army and the Kaduna state government had burnt and demolished their private residence located at Zaria in Kaduna state.

“We urge Your Excellency to terminate forthwith the physical and mental agony that has been inflicted on our clients by releasing them from illegal custody and allowing them to travel abroad for urgent medical attention.”

According to Falana, while El-Zakzaky was at a risk of total blindness, his wife still had bullets lodged in her body causing her “excruciating pain and agony”.

The lawyer said if the federal government insisted on restraining them, it should at least release them on health grounds

He added that the judicial commission set up to investigate the causes of the 2015 attack did not recommend the indefinite incarceration of El-Zazaky and his wife, while calling for their immediate release.

“In case the federal government is not prepared to direct the State Security Service to comply with the orders of the Federal High Court we are compelled to urge Your Excellency to order the release of the couple on health grounds,” he wrote.

“Although Sheik Elzakzaky lost his left eye while he is on the verge of losing the right eye sequel to the brutal treatment meted out to him by the armed soldiers the State Security Service has denied him foreign medical treatment recommended by the local specialists who had attended to him.

“Even the alternative arrangement put in place by the family of the Sheik to bring eye specialists from abroad to treat him in custody has equally been rejected without any legal justification.

“It may interest Your Excellency to know that the medical condition of Mrs Zainab Elzakzaky is by far worse than that of her husband.

“For reasons best known to the State Security Service, some of the bullets lodged in her body during the brutal attack of December 14, 2015 have not been extracted up till now. In the circumstances, she has been subjected to excruciating pain and agony, on a daily basis.

“Her life which is currently in danger may be saved and prolonged if she is allowed to receive adequate medical attention without any further delay.”

TWITTER @thecableng
Copyright 2020 TheCable. All rights reserved. This material, and other digital content on this website, may not be reproduced, published, broadcast, rewritten or redistributed in whole or in part without prior express written permission from TheCable.
Tags
El-Zakzakyfemi falana
Advertisement