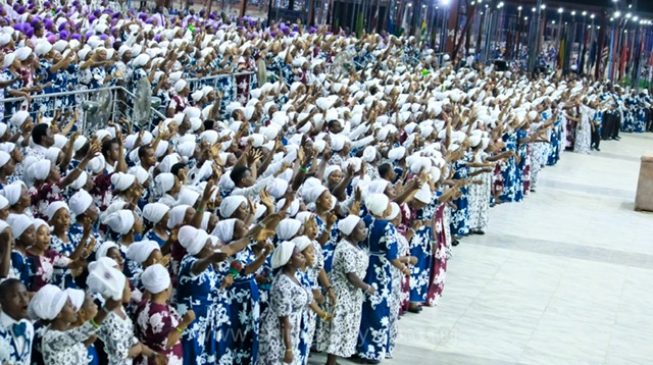 07:35 2019
Print This Article Share it With Friends
👤by Bisi Daniels  0 Comments
Advertisement

The most popular reason for the participation of millions of people in the monthly Holy Ghost Service of the Redeemed Christian Church of God (RCCG) is the touch of God. People come from many other churches, making the services interdenominational.

But despite the varied expectations of the congregants, they are unified in the belief of the presence of God.

That was the reason God approved the service. Pastor Adeboye’s account: “Some years ago (1986), I was in London preparing the Sunday School booklet for the mission when I heard from God. He said, “Son, what do you want for your birthday?”

So I said, “Lord if that is you, please repeat the question.”

He assured me it was Him and asked again what I wanted as a birthday present.

I replied, “What I want is that all my members will get miracles.”

I replied “That’s all I want.”

Then He said, “In that case when you get home, call them together and I will give them whatever they ask for.”

I needed to call the service a name, so I asked Him.

And He said: “Holy Ghost Service.” 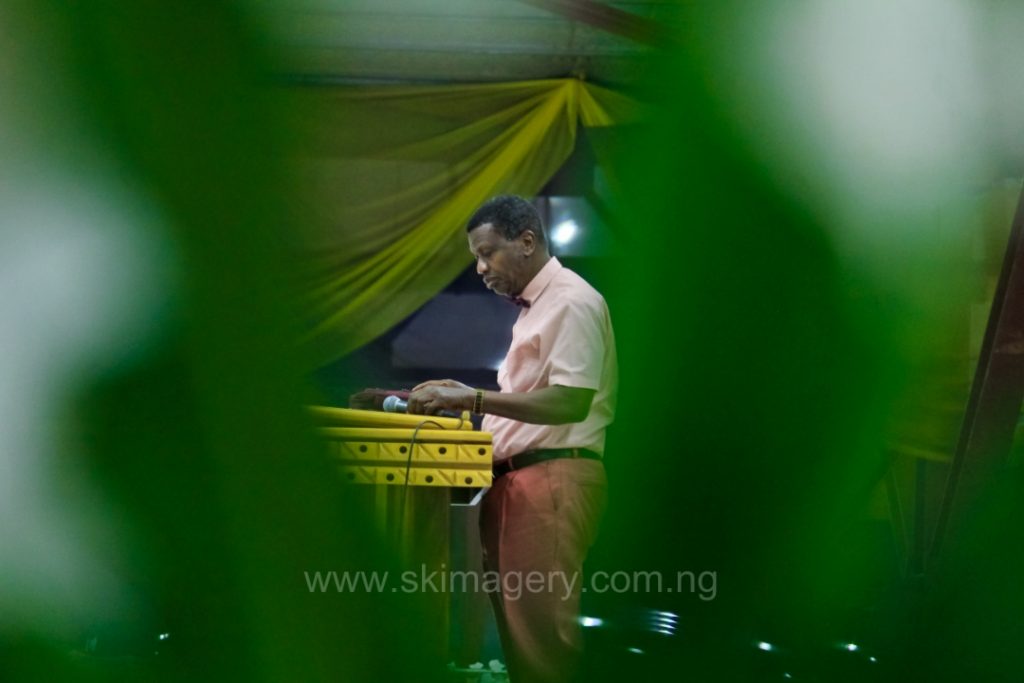 What happened at the first Holy Ghost Service was wonderful. And when we finished, my people came to me to request that I consulted God for the service to hold every year.

But after some time, members of the church suggested that I should request for a monthly Holy Ghost Service.”

Hundreds of people gush out during altar calls by Pastor Enoch Adeboye, the General Overseer of the church; and millions accept his prophecies announced as “words of knowledge,” with thunderous enthusiasm. They also believe in the efficacy of his prayers, which have birthed many miracles.

But don’t worry about the presence of the 77-year-old cleric who shows no signs of aging at work – prolonged fasting, traveling around the world for ministrations and standing for hours to preach. He has always attended the Holy Ghost Services since it started in 1986 anyway.

In the language of his earlier career as a mathematician, he is a “constant,” at the services.

But long before he appears on the altar, the two expansive auditoriums at the Redemption Camp go into a joyous mood with people dancing ecstatically to praise and worship songs.

Rendered with the latest of musical instruments and by gifted lead singers backed by a massive choir, aptly named the “Mass Choir,” the songs are rich and soul-stirring.

The sight of millions unified in singing and dancing would have been scary in another setting but in the Camp, it is jubilation time in the city Godpromised him years ago when he lived in Mushin, a suburb in Lagos as General Overseer of the church.

Like every big thing in God’s plan, growth took time. The church, which was founded in founded in 1952 by Pastor Josiah Akindayomi has had its difficult moments.

Pastor Adeboye was living big as a lecturer at the University of Ilorin when he succeeded Pastor Akindayomi as General Overseer and had to move to Mushin.

He tells his story: “Prior to becoming the General Overseer of the Redeemed Christian Church of God, I was the Head of Department of Mathematics at the University of Ilorin, Nigeria. I was living in a mansion with a two-bedroom guest quarters. I also had servants’ quarters with four bedrooms. All these were not part of the main house. But when I became the General Overseer, I had to live in a one-room apartment in Mushin (a relatively poor suburb in Lagos). I left my wife and children in Ilorin to be in Lagos to work in the church. Due to my difficult living conditions at that time, I had to tidy up things before my family could join me.

Before bringing them over, I went to God in prayers and explained the challenges I was facing. I told God to build a house for me. Left to me, I did not mind using the one-room apartment, but the thought of housing my entire family in one room posed a great challenge.

God’s response to me was, “Son, don’t ask for a house because I have decided to build you a city.’’

From 40 parishes then, the church has spread to 198 countries and it is now the largest Pentecostal church in the United Kingdom. From all these countries, people share in the mood of the Holy Ghost Services beamed live to their parishes and homes. And despite the distance, many people have testified of miracles received from their participation in the services.

The June Holy Ghost Service typified recent ones in mood and size. It was the sixth of the Swimming in Glory Series, with the theme “Born to Sing God’s Grace.”

And the congregation did sing and dance!

From four other zones of the church, choristers came to join the Mass Choir, forming a large dancing lake of people.

The service started with congregational prayers, followed by a long praise and worship session, in which the congregation immersed themselves excitedly with dancing and singing.

Many people, even some elderly ones, were seen dancing vigorously, not just gentle swings. More songs came later from the choirs from the zones and a solo performance by a fourteen-year-old boy who was rewarded with the embrace and prayers by Pastor Adeboye and his wife.

With so much energy on display during the praise and worship, it is obviously becoming one of the high points of the services.

Other highpoints are the prayers for nations, led by the wife of the General Overseer, Pastor Folu Adeboye; the altar call, which is another constant; and testimony time, when people testify to the touch of God. Many of the amazing testimonies are greeted with cries of joy and more praiseto God by the congregation.

There is always another round for the Mass Choir to sing at the end of which the mistral, ushers in Pastor Adeboye for his own sermon. The Congregation switches into prayer mode as wind instruments rent the air, and people go down on their knees when the Pastor kneels at the altar to pray in exaltation to God.

The sermon for June dwelt on the need to praise the Lord, which the church emphasizes.

Reading from Psalm 34, he said man was created to sing God’s praise as was all His creations and that there are really songs for every situation.

“If you want God to draw near, sing His praise because He inhabits the praise of His people,” he said. 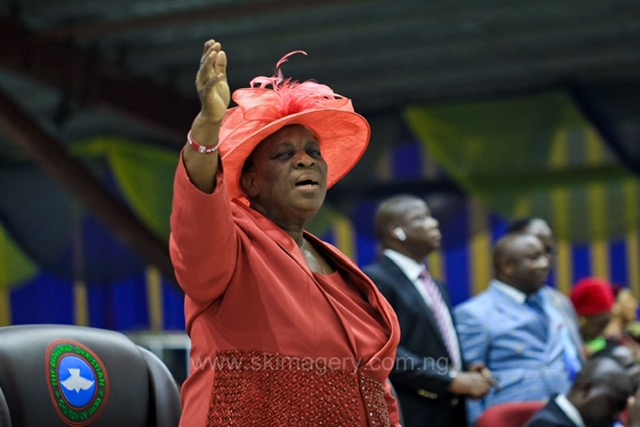 He later highlighted other benefits of praising God as:  Divine visitation; open doors; earth-shaking miracles; destruction of yokes; silencing enemies and even making them servants.

Also, like in the case of Solomon, some level of praise could be rewarded with blank cheques.

The General Overseer explained the many ways through which God can be praised:

Some people feel too big and proud to praise God, but those who know where they are coming from, who know how far He has taken them, find it easy to sing joyful songs to Him.

Praising God with the hands: When we lift our hands up (to the Lord) we are saying, “I surrender.” By surrendering, we show God that we have no strength of our own to face our challenges and He intervenes. The elders have a sayingthat when a child lifts up his or her hands, he or she is carried.

When you lift your hands to the Almighty God, He will look down from Heaven; He will carry you in His mighty hands and no devil can touch you.

We also clap while singing His praise. Psalms 47:1 says “O clap your hands, all ye people; shout unto God with the voice of triumph.”

When the Bible says clap your hands, He’s actually saying, put your enemies or your challenges between your hands and jam them together – crush them.

Clapping for Jesus also means you will cooperate with Him.

Praising with the legs: It is done by bowing our knees or dancing.When we bow, we are admitting His superiority.
Praising God with the whole body: This is done by prostrating. By doing that, we are telling God, He made us and without Him we are nothing. I do that often when praying with the ministers because when I remember what God has done even here on this camp ground, which was a jungle when we came, I cannot but praise Him in every way possible; I prostrate.

Towards the end of the service pastors of the church laid hands all everybody in attendance. The congregation loved that too!