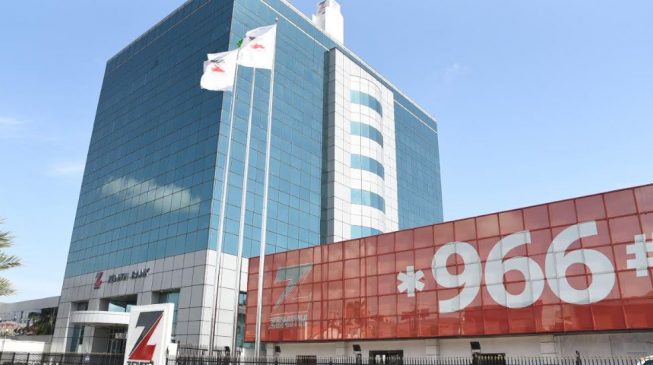 09:24 2019
Print This Article Share it With Friends
👤by Mike 'Uzor  0 Comments
Advertisement

Nigerian banks made significant progress in recovering bad loans in 2018. That was the singular factor that powered profit performance in the year while revenue constraints remained. Some banks recorded significant write backs of previous credit losses, which seems to have continued to obscure the underlying industry problem in the core business.

Weakness in interest income hindered revenue growth in banks in the year and the few banks that were able to grow revenue did so by growing non-interest earnings. Revenue performance generally failed to provide the strength to grow profit in the year. Profit improvements happened through cost cutting and this was led by loan impairment loss reductions. The bigger the cuts in credit losses, the stronger the profit performance attained in the year.

Zenith Bank retained the position of Nigeria’s leading bank by profit for the second year with after tax profit of over N193 billion at the end of the 2018 financial year. Profit growth slowed down sharply from over 34% in the preceding year to 11% in 2018, reflecting a 15% drop in revenue.

Profit improvement therefore happened for Zenith Bank in 2018 by drastic cost cutting that saved more money for it than what it lost on revenue drop. The cost cutting harmers fell on loan impairment expenses and interest cost. It was a white flag up for the bank’s management in 2018 for snatching resources from creditors and bad customers to grow the wealth of shareholders. 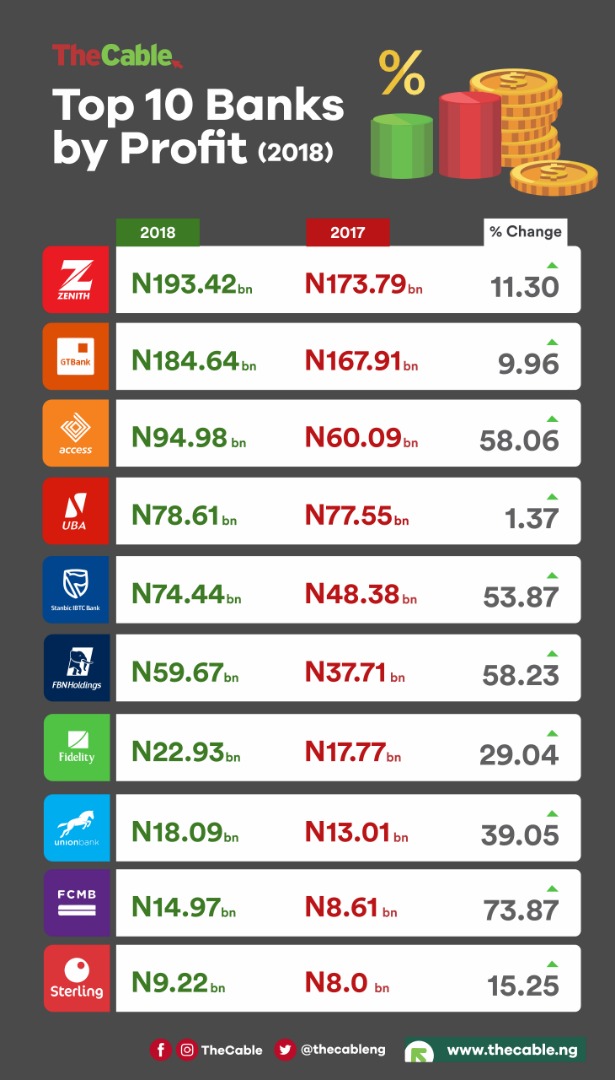 Guaranty Trust Bank maintained its position on the banking industry ranking by profit at the end of 2018. The bank closed the year with an after tax profit of about N185 billion – a year-on-year increase of under 10%. This is a sharp slowdown in growth rate from 28% the bank recorded in 2017.

The bank was unable to improve revenue reasonably in the year due to a drop in interest income and the profit improvement was built by cutting cost. This came mainly by a 60% cut in loan impairment expenses. The bank’s management extracted increased profit margin per naira of revenue in the year, taking profit margin to a new peak at over 42%.

Access Bank climbed one step ahead to take the position of the 3rd biggest bank in Nigeria by profit in 2018. It closed the financial year with an after tax profit of N95 billion with one of the industry’s top record advances of 58%. This is a compensating performance for a 15% profit drop the bank suffered in 2017.

The bank is one of the few operators that were able to push up revenue in the year, with an impressive growth of 15%. That strength was further reinforced by a 57% cut in credit loss expenses as well as a 55% drop in tax expenses. The banks’ management continued to experience the headache of rising interest expenses that consumed over 54% of interest income in 2018.

UBA steps down from the 3rd position in the prior year to the 4th on the ranking with profit flat at under N79 billion for the 2018 financial year. Profit improvement slowed down sharply for the second year from 12% in 2017 to 1% in 2018 – the slowest profit improvement among the top 10 members.

The room for profit growth was sealed by a major slowdown in revenue growth and rapid increase in interest expenses. An escape route that prevented a profit drop in the year was loan recoveries. Loan write backs helped management to cut loan loss expenses by more than 86% in 2018. That brought credit loss expenses lower than the bank has seen any time in the past four years.

On the 5th spot is Stanbic IBTC Bank, retaining the position for the second year. The bank ended the 2018 financial year with an after tax profit of over N74 billion, representing another top industry growth record of 54%. The bank had closed the prior year with profit nearly doubling.

In just two years, the bank has launched itself to a profit region where it is closing ranks with UBA. From closing ranks, it could overtake should it maintain for the third year the galloping speed seen in the last two years.  In line with the industry trend, the profit improvement came from cost saving – mainly a shift from a net loan impairment loss in the preceding year to a net write back in 2018.

FBN Holdings places 6th on the table of Nigeria’s leading banks by profit, the same position it held in the prior year. It built an after tax profit of close to N60 billion at the end of 2018 – a year-on-year growth of 58%. This is one of the top profit improvements recorded in the banking industry in the year. It is also another major profit advance for the bank after tripling profit in 2017. Despite the strong growth, it was unable to improve its position on the table. The bank has not yet been able to match its 2014 profit high of N84 billion since it suffered a major profit drop in 2015.

Loss of significant profit capacity was the effect of major increases in loan loss expenses in FBN Holdings in 2015 and 2016. Profit performance has been undermined considerably by over N600 billion in credit loss expenses the bank has recorded in the past five years. The improving performance equally follows major drops in the loan impairment charges in the past two years by 33% in 2017 and 43% in 2018.

The 7th position is retained by Fidelity Bank, which posted an after tax profit of roughly N23 billion for its 2018 operations.  That represents a growth of 29% in the year, building further on a 225% profit leap in 2017. The bank’s management faced the challenge of slowing revenue growth in the year and took steps to squeeze costs to extract an increased profit margin per naira of gross earnings.

The biggest cost saving for the bank came from a 63% drop in credit impairment expenses, during the year. The cost savings enabled management to meet cost increases in the other main expense lines and improve profit margin.

Union Bank still holds its 8th position on the ranking with a closing after tax profit of N18 billion in 2018. A 39% profit advance in the year compensated for a decline it recorded in 2017. The profit improvement happened despite an 11% drop in gross earnings, which was lead by interest income.

In line with the industry trend, loan recoveries changed the bank’s operating story from a possible drop in profit to the strong growth recorded. There was a shift from a net loan loss expense of over N25 billion in 2017 to a net write back of over N3 billion in 2018.

FCMB retains the 9th spot on the ranking with an after tax profit of slightly below N15 billion at the end of the 2018 financial year. The bank closed the year with an industry leading profit growth record of 74%, making up for a 40% profit fall it suffered in 2017. Revenue growth remained tight for the bank and the profit performance was powered by a 38% drop in loan impairment expenses in the year.

Sterling Bank closes the top 10 big profit earners’ table retaining its 10th place with an after tax profit of N9 billion.  The bank has sustained profit improvement for the second year, having grown the bottom line by 55% in 2017. It reported a moderate improvement in revenue in 2018, which it reinforced with a 52% drop in credit loss expenses to build profit.