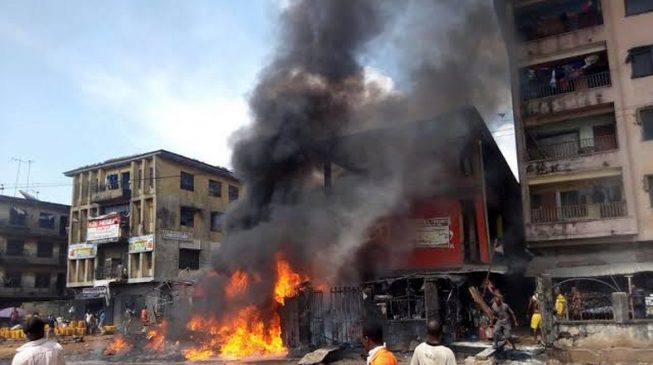 08:58 2019
Print This Article Share it With Friends
👤by Dyepkazah Shibayan  0 Comments
Advertisement

Naemeka Achebe, obi of Onitsha, says there is need to curb illegal trading in the city.

The monarch said this while reacting to two fire incidents in the city within three days.

Five people died in the inferno caused by the explosion of a petrol tanker while more than 100 shops were reportedly razed and goods worth millions of naira destroyed in the first incident which happened on Wednesday.

On Friday, another truck exploded in the city, destroying at least 22 cars.

In proffering solutions against recurrence of fire outbreaks, Achebe said there is a need to ease traffic and enforce planning regulations.

“During my annual Ofala address to the community, I spoke about the pressures of urbanization and unbridled commercialization in the city, the need to debottleneck the road traffic conundrum in the city, and the enforcement of planning regulations to curb illegal roadside trading that impede both vehicular and human movement,” he said in a statement.

“I also spoke about the related issue of poor environmental sanitation that is choking the metropolitan city with garbage.

“An adequate fire service is a sine qua non for a bustling metropolitan city of Onitsha as well as other major towns in Anambra state.”

“We thank Governor Obiano, for acting immediately to set up a panel of enquiry into the fire incident and pray that the remit of the panel should go beyond this specific event to address the fundamental causes of these disasters, and a holistic plan for a broad-based tackling of the challenges of urbanization and commercialization which contribute to environmental pollution and degradation,” he said.

TWITTER @thecableng
Copyright 2020 TheCable. All rights reserved. This material, and other digital content on this website, may not be reproduced, published, broadcast, rewritten or redistributed in whole or in part without prior express written permission from TheCable.
Tags
Naemeka AchebeObi of OnitshaOnitsha fire
Advertisement