Tinubu, Akande ask Oni to publicly dissociate himself from ‘court action against Fayemi’ 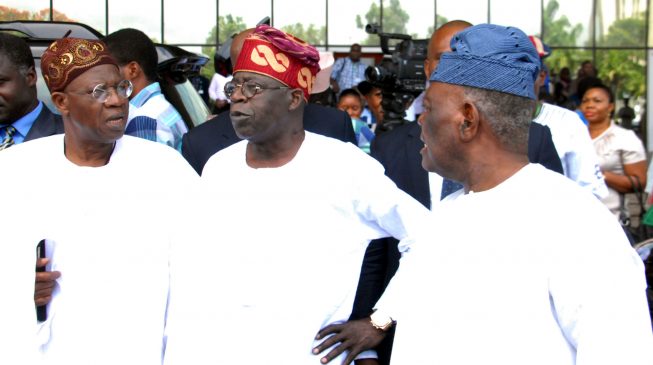 17:37 2018
Print This Article Share it With Friends
👤by Femi Owolabi  0 Comments
Advertisement

Bola Tinubu and Bisi Akande, chieftains of the All Progressives Congress (APC), on Tuesday called on Segun Oni, runner up of the party’s governorship primary election in Ekiti state, to come out publicly to dissociate himself from a suit allegedly filed—asking the court to revoke the candidacy of Kayode Fayemi.

On Monday, it was alleged that Oni filed a case at a federal high court in Abuja to challenge the emergence of Fayemi as the party’s flagbearer.

He purportedly asked the court to determine if Fayemi’s action did not violate the constitution and the guidelines of the ruling party primary by contesting the election while he remained as a serving minister to the federal government.

In a statement, the chieftains condemned the alleged action.

“The decision to support Kayode Fayemi was reached through a combination of persuasion, reconciliation, consensus- building and understanding on the part of all the stakeholders,” the statement read.

“We led several intervention meetings that held in Abuja, Lagos and Ekiti with all the APC Ekiti gubernatorial aspirants where we resolved to support whoever emerges from the May primaries.

“We have stood behind Kayode Fayemi’s candidacy since he won the governorship primaries and when we all gathered in Ekiti for the Mega Rally on June 19, it was an emphatic declaration of support for his candidacy.

“Again on the night of June 19, we as leaders met with all stakeholders including all former aspirants and commended them for not defecting from the party. They all emphasized their commitment and suggested that Kayode Fayemi run an effective and inclusive campaign that will ultimately lead to an all-inclusive government.

“We have been consistent in our position working to ensure victory for the APC candidate, we are therefore surprised to find out through media channels about plans to challenge Kayode Fayemi’s candidacy on spurious grounds.”

“Furthermore, it is worrisome that a court action against Kayode Fayemi and our party is alleged by media reports to be instituted by Chief Segun Oni, which from our investigations is being sponsored by some unknown persons.”

The chieftains are demanding the sponsors of the court action to withdraw their case immediately if, indeed, they are not agents of the opposing Peoples Democratic Party (PDP).

“We also request that Segun Oni should also come out publicly to dissociate himself from and condemn the case and play active role in the APC campaign.”

TWITTER @thecableng
Copyright 2020 TheCable. All rights reserved. This material, and other digital content on this website, may not be reproduced, published, broadcast, rewritten or redistributed in whole or in part without prior express written permission from TheCable.
Tags
bisi akandeBola Tinubu. #EkitiDecideskayode fayemiSegun Oni
Advertisement

Symptoms, treatment, prevention… what to know about the mysterious coronavirus