Tinubu sure APC would reclaim Ekiti 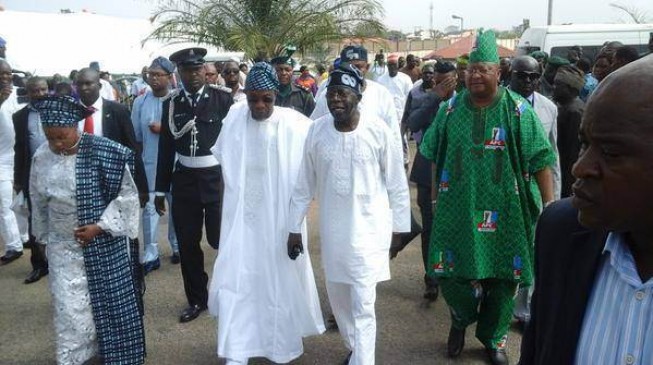 19:06 2014
Print This Article Share it With Friends
👤by Taiwo George  0 Comments
Advertisement

Bola Tinubu, a former governor of Lagos state and the national leader of the All Progressives Congress (APC), says the reins of government in Ekiti state would return to his party.

Kayode Fayemi, the immediate past governor of the state, lost the June 21 gubernatorial election to Ayodele Fayose, the incumbent governor, who is a member of the Peoples Democratic Party (PDP).

Speaking at the Osogbo township stadium during the second term inauguration of Rauf Aregbesola as governor of Osun state, Tinubu commended the people of Osun for supporting the governor.

“I’m so happy we continued here in Osun,” he said.

“They sent over 30,000 policemen here armed to the teeth but your determination and steadfastness that no amount of police can steal your vote is what we are celebrating today.

“They came and stole our mandate in Ekiti but we shall recover it. We have done that before.”

Accusing the government at the centre of insincerity, Tinubu challenged the people to brace up for the forthcoming election.

“They take from you and steal from all of us. The class system being created, the poor remain poor.

“The revolution is about relief for the elderly, the welfare programme, the great global economy that would feed our children, put food on our table, that would bring good jobs to the youth, create employment, create industry and also generate electricity.

On his part, Aregbesola promised not to disappoint the people for the confidence reposed in him, saying he would devote the next four years to the development of the state.

Present at the occasion were Muhammadu Buhari, a former head of state; former vice-president, Atiku Abubakar, represented by Titi Abubakar, his wife; governors of Lagos, Ogun, Edo and past governors of Osun and Ekiti; Lamidi Adeyemi, the Alafin of Oyo, among others.

TWITTER @thecableng
Copyright 2020 TheCable. All rights reserved. This material, and other digital content on this website, may not be reproduced, published, broadcast, rewritten or redistributed in whole or in part without prior express written permission from TheCable.
Tags
APCBola TinubuEkiti Staterauf aregbesola
Advertisement