Tinubu is the ideal person to succeed Buhari, says Ogunlewe 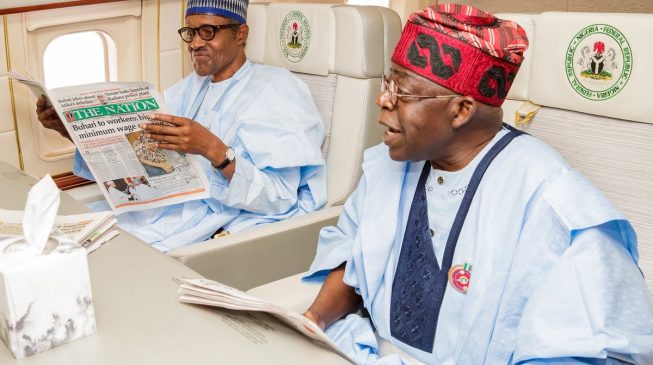 13:54 2019
Print This Article Share it With Friends
👤by TheCable  0 Comments
Advertisement

In an interview with The Sun, the former member of the Peoples Democratic Party (PDP) said Tinubu has paid his dues and he deserves all the support he needs to get to the number one position in the country.

He said the 2023 presidency should be thrown open, adding that south-west and other regions can take a shot at it.

“I have been reading and watching a lot of comments about it. I believe 2023 should be thrown open. Nobody should be shut out. There is nothing wrong about south-west showing interest,” he said.

“What is the noise about Tinubu all about? Is Tinubu not qualified to contest? We are talking about democracy. To shut out some people or group is undemocratic. Senator Bola Ahmed Tinubu wants to contest, let him contest.

“Tinubu has paid his dues. If Tinubu wants to contest, let him contest, and let Nigerians decide his fate. Tinubu is a dogged fighter. He has triumphed over many challenges. He has seen it all. He can do it if given the chance. Tinubu is from the south-west, and anything for the progress of south-west, I’m for it. If the 2023 project is for south-west interest, then I’m now on the same page with Tinubu, and I have no apology for it.”

Ogunlewe said he has dumped the PDP for good, vowing not to have anything to do with the party again.

“To clear doubts and speculation, I’m using this opportunity to state that I’m now in APC. I’ve left PDP. I’ve dumped PDP for good, and there is no going back on my decision. I have nothing to do with PDP again. I have always been a progressive politician, and I have gone back to where I belong with my teeming supporters,” he said.

“I’m not missing any of those PDP leaders, including Bode George himself. I’ve left the party for them. I’m a progressive and I’m progressive inclined. I don’t want to be a part of a team that is not success-oriented.
“Like I said earlier, I originally belong to the progressive camp, and it’s like I have been a stranger among them in PDP so I’ve gone back to where I came from, and where I rightly belong.

“You know I was elected a senator on the platform of AD which over the years has now metamorphosed into APC. Let George and others continue to say whatever they want to say. I’m not bothered as I’ve moved on with my life. I have no regret at all for dumping PDP.

“I have to part way with George and other PDP leaders in Lagos State when I realized that we don’t share the same vision and goals. I believe in being productive, and I also believe in sharing the same political platform with those who have vision and ideals that will not only make a political party a vibrant and winning one but also the one that will be people-focused and people-oriented. I leave George and others to manage their political party, PDP in Lagos State whatever way they deem fit. For me, there is no need to talk about these PDP leaders again, they’ve become part of the history of my political life.”

TWITTER @thecableng
Copyright 2020 TheCable. All rights reserved. This material, and other digital content on this website, may not be reproduced, published, broadcast, rewritten or redistributed in whole or in part without prior express written permission from TheCable.
Tags
APCBola Tinubulagos
Advertisement