Tinubu: Rancour between Ambode and I? That’s an insult 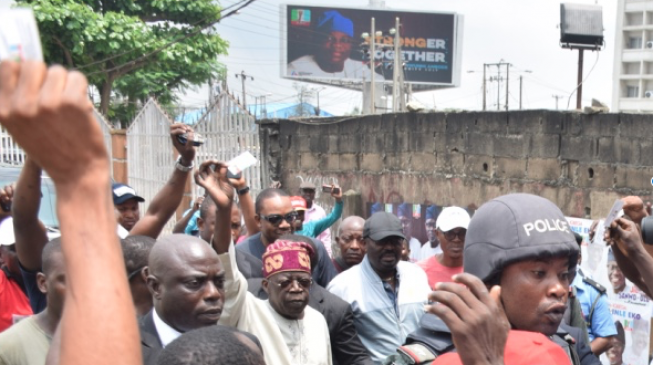 13:40 2018
Print This Article Share it With Friends
👤by Oluwatoyin Bayagbon  0 Comments
Advertisement

Bola Tinubu, a national leader of the All Progressives Congress (APC), says there is no rift between him and Akinwunmi Ambode, governor of Lagos state.

Speaking at his ward in Alausa during the APC governorship primary on Tuesday, Tinubu said he considers reports of a rancour between him and Ambode as an insult.

He said the governor had worked under him as a civil servant and was given the opportunity to govern Lagos after that.

“Rancor between us? I will regard that as an insult. I brought Ambode to the people. He was a civil servant under me,” he said.

“He performed very well as a civil servant and when he showed interest in politics after the leadership, we gave him the opportunity. I introduced him to the party. The party accepted him, he became the governor.

“Now if the party now say they want either a change or they want to reaffirm the governorship through open exercise, and they elect him today, so be it.

“You will remain relevant as a leader if you submit yourself once in a while to what your people want.”

Describing the exercise as a celebration of democracy, Tinubu said the massive turnout of APC members across the state is not his making.

He said members of the party had come out en masse to choose their preferred candidate.

“It is a democracy day for us. Elections are supposed to be a celebration of democracy and we have tried to show the world and the Nigerians that we are democrats because democracy is present in us,” he said.

“What an open election means is elimination of corruption in any delegate system, transparency in the true sense of it so that the party faithful as you have seen them here- you can’t buy all these people, you cannot.

“This is the committed commitment to party supremacy. It is even beyond me as a leader. Whatever is happening today, I have to submit myself to the party wishes.

“This is what they want; they want the opponent. They want to participate… it’s a very difficult process but you’ve seen the people. And we the people is the preamble of every constitution, democratic constitution. And If that is so, people have been given their wish.”

TWITTER @thecableng
Copyright 2020 TheCable. All rights reserved. This material, and other digital content on this website, may not be reproduced, published, broadcast, rewritten or redistributed in whole or in part without prior express written permission from TheCable.
Tags
akinwunmi ambodeAll Progressives CongressBola TinubuJide Sanwo-OluLagos APC primary
Advertisement