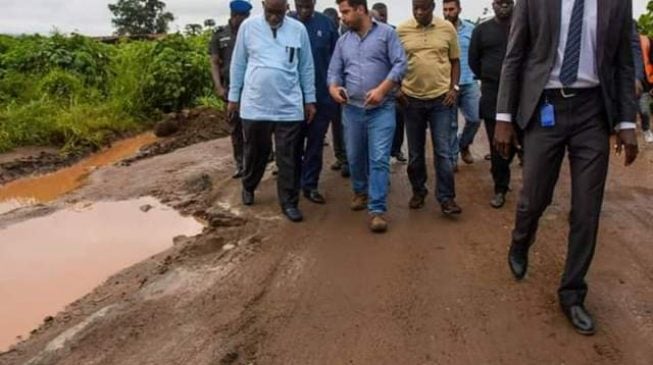 News came out the other that the Federal Government has granted approval to Ondo and Ekiti Governors to fix Akure-Ikere Ekiti Road and to toll the road. If this is done that road will be the only tolled interstate road in Nigeria and the extremely poor people who live in Akure, Igoba. Iju, Ita Ogbolu, Ikere and further would have been used as guinea pigs for a wrong-headed, oppressive, elitist, escapist, half-baked and irresponsible policy being muted by Mr Raji Fashola and being accepted, supported and promoted by Governors Kayode Fayemi and Rotimi Akeredolu. They also announced that they are procuring loans from the African Development Bank to do this project.

When Minister Fashola mooted the idea of returning toll gates to Nigerian road, I immediately objected. I will state my reasons below. I wrote a long article on the issue but lost same as I had a tech mishap with my Macbook Pro. I was commenting generally on the propriety of that policy given the fact that we only get 30% value-for-money on government contracts in Nigeria and the fact that it is not the people’s fault that public funds have been mismanaged, plundered and embezzled even more, since President Obasanjo scrapped toll gates in Nigeria. I wondered, and still do, why the common man had to pick this bill. What I did not know was that this policy was going to be tested in my very backyard; between my hometown Akure, and Ikere-Ekiti a stretch of no more than 25 kilometres and my regular route when I attended the then Ondo State University (now EKSU), between 1987 and 1991. The last time I passed this road during the campaign season I filmed as much as I could and went back there on a Sunday to capture more of what disaster the road had become. I know the route like the back of my hand and I know the profile of people who live there. It is beyond egregious and reckless to impose tolls on such a road just because these governors think they can, when we shy away from tolling heavy commerce roads like Lagos-Benin, Benin-Onitsha, Kano-Katsina, Kaduna-Kano, Abuja-Lokoja. This is sheer impunity at work!

The people of that region are extremely impoverished and have suffered greatly for many decades. I believe they at least deserve to have simple roads but the government is moving from craters which they have plied with their many SUVs over the years, to passing the buck to the poor people by way of tolls. It must also be noted that government personalities don’t pay tolls, so we the common people will once again pick up their tabs as they ride free.

My principal concern around Mr Fashola’s plan to toll all roads in Nigeria stems chiefly from experiences with Lagos, where many people believe tolling is a total rip off of the people who live in the Lekki and Ikoyi axis for the next 30 years. We hear that a certain political kingpin is the beneficiary of the tolls and one has to wonder whether we the people deserve no amenity at all after all we pay taxes especially in the form of PAYE, VAT, Company Income Taxes, and the rest. When last I was in Lagos, I noticed that the toll gates were opened for cars to pass for free from time to time. I could only conclude that the Lagos government itself knows that people have paid so much for so long.

I am therefore championing a campaign against tolling Akure-Ikere Ekiti road. “Oosha boo ba le gbemi fi mi sile bi mo she wa” our people say. If Fayemi and Akeredolu cannot improve the lots of Nigerians living in their states, they shouldn’t make their situations worse. These governors should take a cue from the South East governors who tarred a 110km road between Owerri and Akwa which is one of the best roads in Nigeria, without disturbing the Federal Government or taking a World Bank or AfDB loan. South West governors must up their games and think big. Their tenures should not only be about dashing around in expensive convoys. They should not be escapist too. I am aware that Ekiti State is planning on building an airport just to escape the responsibility of fixing the 25km road linking the two state capitals – the road which they have now obtained ‘approval’ to toll. This is how we fly over our problems in Nigeria. Already all the roads into Ondo and Ekiti are disaster zones. The Kabba-Omuo-Ado road for example is a scene from a horror movie.

Our elitist politicians have ignored options of raising finances which will touch them and their friends in high places. They can only bully the poor. Lagosians fought back and the Chevron toll gate was abandoned. The people of Ondo and Ekiti State deserve that link road and they will fight back and resist this upcoming prolonged oppression. We know that the deals are being done presently. People get commissions for all these loans coming from everywhere, and people also structure themselves to collect percentages from every toll. Our people are sick and tired of paying into the pockets of political kingpins and wannabes who hope to become the kingpins of tomorrow.

I passed the Kaduna-Kano road two weeks ago. It is being rebuilt the way it should be. 4 lanes with a divider. A proper expressway. No toll gate is being erected and the people of Kaduna, Kano and Katsina are in no mood for any toll gate payment but they want good governance. Our people in Ondo and Ekiti States are no slaves. They have been beaten down over the decades quite alright but they will rise as the full blooded Nigerians that they are.

We say no to tolling. We say yes to infrastructural amenities that proper human beings deserve. Our elites who have creamed off this country’s commonwealth should know that now is the time to repay us with visible sacrifices. Where is the proposed Luxury tax? Powerful interests kill it right? Where is the SUV tax like they have in Ghana? No, our elites will never pay. Where is the property tax? That too was killed.  That is how we got to a point where they believe they have so applied their Machiavellian tactics so well and destroyed, castrated, lobotomized, gutted and denuded poor Nigerians so much that they can walk away like nothing happened and get Nigerians to pay even for the air they breathe. Nigerian elites have to repent.

WE SAY NO TO TOLLS BETWEEN AKURE AND ADO EKITI. WHAT WE WANT IS A GOOD, WELL-MAINTAINED, BASIC INTERSTATE ROAD. AND NOW IS THE TIME FOR THOSE WHO HAVE, TO CONCEDE A LITTLE, FOR THE GOOD OF ALL, NOT THE TIME FOR THE ALREADY DOWNTRODDEN TO BE ASKED TO PAY SOME MORE

I make two notes before concluding. Some people have suggested that we wait for them to do the road and then refuse to pay the toll gate. I wouldn’t be a part of that. Whatever we desire we should be able to state upfront, rather than join these politicians in the art of deception. So, they must just do the road and forget about tolling. Everywhere in the world there is nowhere government jumps to tolling village roads before trunk roads. The second note is that indeed, the bad part of this road is at the Ondo State end. Ikere to Ado were well paved just before the last elections, but the Ondo end at Igoba, Ita-Igbotu, Iju, are where craters swallow cars and people lose tyres and shock absorbers.

TWITTER @thecableng
Copyright 2020 TheCable. All rights reserved. This material, and other digital content on this website, may not be reproduced, published, broadcast, rewritten or redistributed in whole or in part without prior express written permission from TheCable.
Tags
Akure-Ikere Ekiti Roadtoll gate
Advertisement