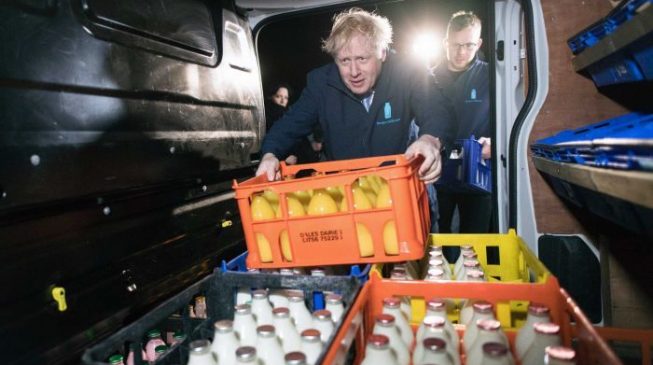 13:10 2019
Print This Article Share it With Friends
👤by Jamilah Nasir  0 Comments
Advertisement

Boris Johnson, prime minister of the United Kingdom, was seen on Wednesday sharing groceries in Leeds shortly before commencement of UK elections.

The prime minister tweeted the video on his official Twitter handle, telling voters they would get more if they voted for his party.

“Good morning folks! Up early delivering groceries in Leeds – and we’ll deliver more if you vote Conservative tomorrow,” he tweeted.

Elections in the UK usually take place every four or five years. The UK held elections in 2017 and is not supposed to hold any other one now but in October, Johnson called for an election to end months of political impasse over the UK’s bid to exit the European Union.

Polling stations in 650 constituencies across England, Wales, Scotland and Northern Ireland opened at 07:00 GMT and voting will end by 22:00 GMT. Over 45 million registered voters are expected to cast their ballot.

A total of 650 MPs will be chosen under the first-past-the-post system used for general election, in which the candidate who secures the most votes in each individual constituency is elected.

Whoever wins the election will ultimately determine whether the UK leaves the EU in January 2020.

Below is the video that the prime minister tweeted earlier:

TWITTER @thecableng
Copyright 2019 TheCable. All rights reserved. This material, and other digital content on this website, may not be reproduced, published, broadcast, rewritten or redistributed in whole or in part without prior express written permission from TheCable.
Tags
Boris JohnsonBrexit
Advertisement

Al-Bashir summoned over 1989 coup that brought him to power