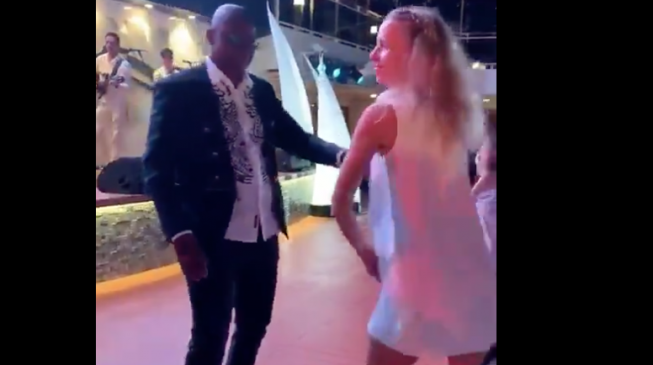 11:13 2020
Print This Article Share it With Friends
👤by Mansur Ibrahim  3 Comments
Advertisement

A video of Ayodele Fayose, former governor of Ekiti state, dancing on a cruise ship while on a ”medical trip” abroad is trending on social media.

The former governor was seen dancing salsa ( a dance routine that has its roots from Cuba) with a lady on the ship.

Earlier, photos of Fayose relaxing on a beach trended as Nigerians accused him of deceiving the court.

The governor, who is being prosecuted by the Economic and Financial Crimes Commission (EFCC) for an alleged N2.2 billion fraud, was granted permission by a federal high court to seek medical treatment abroad.

Fayose is wishing you all Happy New Year from his sickbed. pic.twitter.com/PJaWt6G5js

Just imagine! Just see how this LOOTERS do whatever they like & still get away with it!

Thief @ayofayose telling 🇳🇬Govt that he's bigger than the law!

This criminal MUST be forced back to🇳🇬

This madness from ayo fayose can never happen in any other part of the world! https://t.co/vVMwatHKZu

But what if that dance with the oyinbo babe was part of Gov. Fayose ‘s treatment. Like a therapy recommended by his doctors. Don’t forget dance is a very good form of exercising too. 🤔😂

Dance is actually exercise, for real. But Ayo Fayose sure knows how to have a good time. Let him relax. Probably, last supper things. Heh, heh, heh. https://t.co/WpVD56KPJ3

.@GovAyoFayose "exercising" in a foreign hospital after being granted permission to take a break from corruption trial to travel for "highly urgent medical treatment" by a Nigerian court. https://t.co/nF7nkcFTls pic.twitter.com/uT0s6OsQev

Its a miracle! Peter is healed! Praise The Lord!

This means he's no longer in severe pain and we won't be seeing him on stretchers during his next court appearance or on his way to jail.

So no one is gonna say that in saner climes Fayose's Judge will order him back immediately and the doctor who prepared his medical report will be jailed? Here he is getting physical therapy from a foreign nurse pic.twitter.com/kpqt1xVhMq

This is Fmr Governor Ayodele Fayose that was recently granted permission to travel abroad for medical treatment. Can you see how cool the Intensive Care Unit (ICU) is? 😆😂🤣 pic.twitter.com/sVQLf03NvR

This is Ayodele Fayose under serious medical condition now abroad . The court may need to extend his medical leave really pic.twitter.com/ntRoxGKRUo

TWITTER @thecableng
Copyright 2020 TheCable. All rights reserved. This material, and other digital content on this website, may not be reproduced, published, broadcast, rewritten or redistributed in whole or in part without prior express written permission from TheCable.
Tags
Ayodele FayoseDancing SalsaEkiti
Advertisement