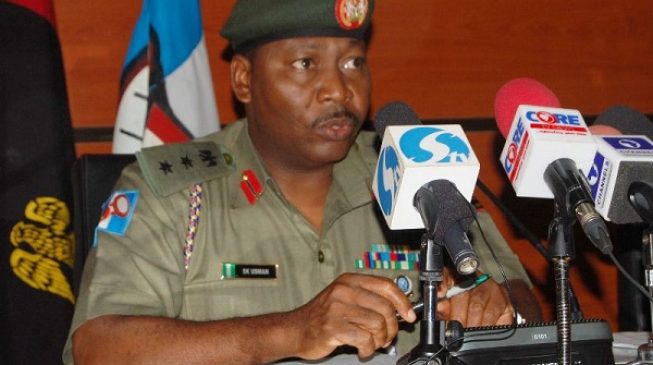 09:04 2017
Print This Article Share it With Friends
👤by Chinedu Asadu  0 Comments
Advertisement

The Nigerian army says eighty-five persons in Boko Haram captivity were rescued on Tuesday during a military operation in Borno state.

In a statement, Sani Usman, army spokesman, said the operation was coordinated by troops of 3 battalion, 22 brigade as well as personnel of the Nigerian air force.

He said 11 Boko Haram fighters were killed during the attack launched under the ongoing Operation Lafiya Dole.

“Troops in their daily clearance of the remnants of Boko Haram terrorists especially in the northern part of Borno state, launched an attack on suspected Boko Haram terrorists’ hideouts at Mogola, Ngaiwa, Tongule and Warsele villages in the Ngala LGA,” the statement read.

“The troops discovered and destroyed a Boko Haram terrorists’ logistics base and a workshop at Ngaiwa, an improvised explosive device-making factory at Tongule and rescued 85 persons held hostage by the terrorists in the villages.

“We also got four dane guns, one Barretta pistol and 22 rounds of 7.62mm ammunition.”

The development is coming barely 48 hours after suspected members of the sect killed at least 18 people in a suicide bomb attack in Maiduguri, capital of Borno state.

13 persons were also wounded in the attack dubbed “second largest” in the city.

TWITTER @thecableng
Copyright 2019 TheCable. All rights reserved. This material, and other digital content on this website, may not be reproduced, published, broadcast, rewritten or redistributed in whole or in part without prior express written permission from TheCable.
Tags
boko harambornoNigerian Armytroops
Advertisement