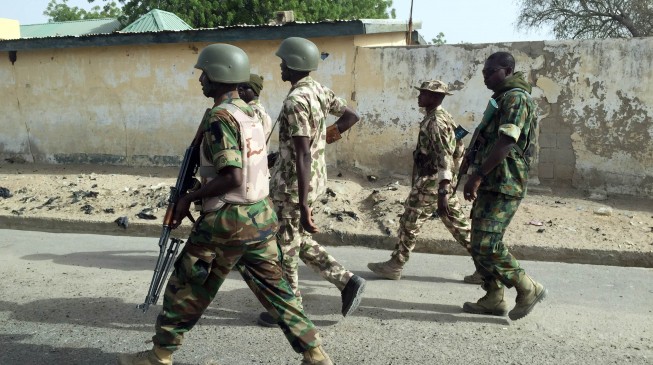 14:23 2018
Print This Article Share it With Friends
👤by Chinedu Asadu  0 Comments
Advertisement

He said the insurgents had escaped their enclaves in Sambisa forest and tried to infiltrate the community.

The troops engaged and killed the Boko Haram members and also wounded several others in the attack, he said, adding that high calibre ammunition were recovered from the insurgents.

The statement read: “Some desperate Boko Haram terrorists attempting to escape the theatre through one of the formidable blocking positions in Goniri, Gujba local government area of Yobe state, had been severely dealt with on Friday, 9th February, 2018.

“The troops destroyed their improvised explosive devices borne-vehicle, neutralised quite a number of them and wounded several others.

“The troops recovered one anti-aircraft gun with long belt of ammunitions, one AK-47 Rifle and other items.”

Alimi expressed regret that preliminary investigations showed some “unscrupulous” elements in the society informed the insurgents about troops’ movement in the area.

He said the insurgents utilised the information and made concerted attempt to infiltrate the community, but “the gallant troops repelled the attack and crushed them”.

TWITTER @thecableng
Copyright 2020 TheCable. All rights reserved. This material, and other digital content on this website, may not be reproduced, published, broadcast, rewritten or redistributed in whole or in part without prior express written permission from TheCable.
Tags
boko haramNigerian ArmyYobe
Advertisement