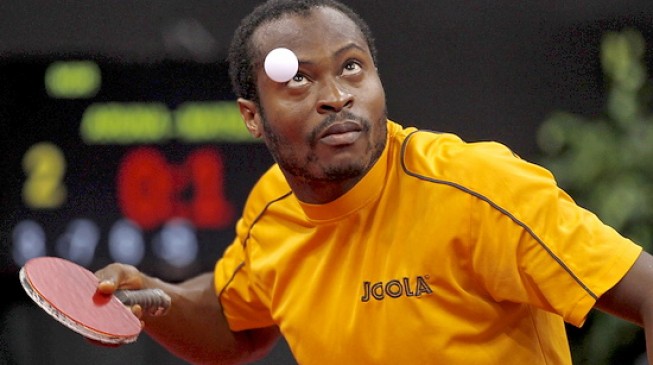 18:18 2015
Print This Article Share it With Friends
👤by Victor Akhidenor  0 Comments
Advertisement

In the final of the women’s event, the Egyptian team came from 2-0 down to defeat Nigeria 3-2, while Aruna Quadri could not save the men’s team from losing 3-2 to the North Africans as well.

In the three events that Nigeria featured in, the Aruna Quadri-inspired team had won two silver medals and a bronze medal in the mixed doubles event.

Quadri remains unbeaten in the tournament, winning all his matches without dropping any.

Egypt still dominate with two gold medals while the colour of the third medal is yet to be known until the final of the mixed doubles against Congo Brazzaville is concluded on Tuesday January 27.

The Singles event serves off on Tuesday.

Four more titles are still at stake at the tournament, which ends on Thursday.

Seventeen countries are taking part in the competition, which serves as qualification for the World Championships in China in April.

TWITTER @thecableng
Copyright 2020 TheCable. All rights reserved. This material, and other digital content on this website, may not be reproduced, published, broadcast, rewritten or redistributed in whole or in part without prior express written permission from TheCable.
Tags
Aruna QuadriegyptInternational Table Tennis Federationnigeria
Advertisement