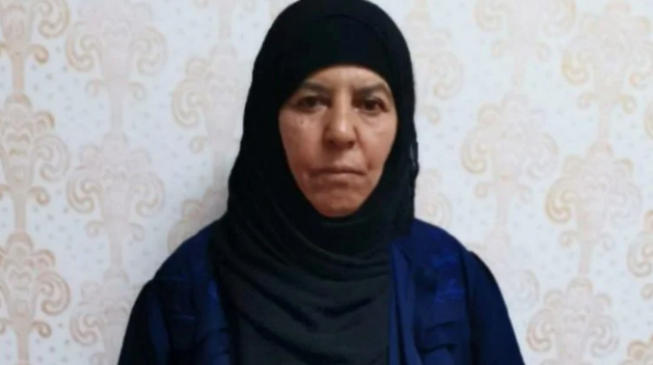 17:01 2019
Print This Article Share it With Friends
👤by Ebunoluwa Olafusi  0 Comments
Advertisement

Turkey says it arrested Rasmiya Awad, sister of Abu Bakr al-Baghdadi, the late leader of the Islamic State (IS), and her husband in Syria.

Awad’s daughter-in-law and five grandchildren are also said to have been detained.

According to NAN, Suleyman Soylu, Turkish interior minister made this known on Tuesday.

Soylu said they were captured in Azaz district of Aleppo city in northwestern Syria on Monday.

The Turkish army and Turkey-backed Syrian rebels have been in control of Azaz district since its military offensive in 2016.

“The arrest of al-Baghdadi’s sister is yet another example of the success of our counter-terrorism operations,” Fahrettin Altun, Turkey’s communications director, tweeted.

” Our determination to bring justice to those who seek to terrorise our people and destabilise our region cannot be questioned.”

Turkey's fight against terror regardless of its ideology or origin continues unabated.

The arrest of al-Baghdadi's sister is yet another example of the success of our counter-terrorism operations.

Our determination to bring justice to those who seek to terrorize our people and destabilize our region cannot be questioned.

Al-Baghdadi was killed in a late-night US-led operation in a compound near the village of Barisha in northwestern Syria on October 26.

President Donald Trump said al-Baghdadi detonated a suicide vest, killing himself and three of his children after US special forces trapped him in a dead-end tunnel.

He said al-Baghdadi’s “mutilated” body was retrieved and tested, providing “certain, immediate and totally positive identification” that it was him.

TWITTER @thecableng
Copyright 2020 TheCable. All rights reserved. This material, and other digital content on this website, may not be reproduced, published, broadcast, rewritten or redistributed in whole or in part without prior express written permission from TheCable.
Tags
Abu Bakr al-BaghdadiRasmiya AwadTurkey
Advertisement

Iran drops 2015 nuclear deal over the killing of Soleimani