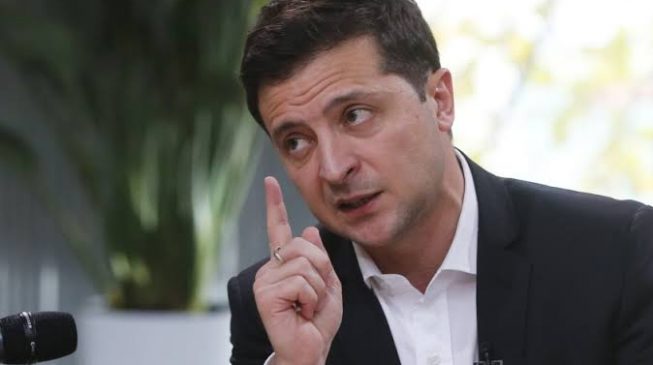 14:57 2020
Print This Article Share it With Friends
👤by Ebunoluwa Olafusi  0 Comments
Advertisement

Ukraine President Volodomyr Zelensky says Iran must bring those responsible for bringing down the Ukrainian passenger plane to justice.

Speaking via Twitter, Zelensky said Iran is expected to issue an official apology, return all dead bodies and pay compensation.

The president added that investigation into the crash must also be open and done without delays.

“Ukraine insists on a full admission of guilt. We expect Iran to bring those responsible to justice, return the bodies, pay compensation and issue an official apology. The investigation must be full, open & continue without delays or obstacles.”

This morning brings the truth.
Ukraine insists on a full admission of guilt. We expect Iran to bring those responsible to justice, return the bodies, pay compensation and issue an official apology. The investigation must be full, open & continue without delays or obstacles.

Iran had admitted it accidentally shot down a Ukrainian passenger plane on Wednesday. The aircraft crashed shortly after take-off from Tehran’s airport, killing all 176 people on board.

The incident occurred after Iran launched missiles that hit two air bases of US forces in Iraq.

The attack was a response to the killing of Qasem Soleimani, leader of the Quds Force, by a US drone strike last Friday.

Iran had earlier denied shooting down the plane but US officials said the country mistakenly shot down the aircraft.

In a statement, the Middle East country blamed its action on “human error”.

It said the plane was mistaken for a “hostile target” because it flew near a sensitive area.

“Human error at time of crisis caused by US adventurism led to disaster.

“Our profound regrets, apologies and condolences to our people, to the families of all victims, and to other affected nations.”

TWITTER @thecableng
Copyright 2020 TheCable. All rights reserved. This material, and other digital content on this website, may not be reproduced, published, broadcast, rewritten or redistributed in whole or in part without prior express written permission from TheCable.
Tags
IranJusticeplane crashukraine
Advertisement