UN: No govt on earth can solve the food insecurity caused by Boko Haram 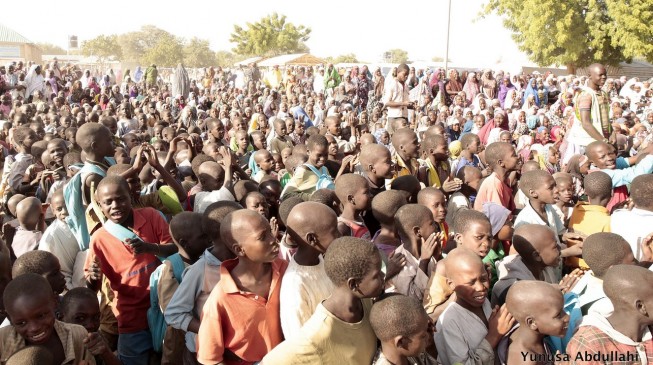 19:23 2017
Print This Article Share it With Friends
👤by Oluseyi Awojulugbe  0 Comments
Advertisement

Toby Lanzer, humanitarian coordinator for the Sahel at the United Nations, says no government on earth can do what it takes to confront the food insecurity challenges caused by the Boko Haram crisis.

Lanzer, who did a spotlight on the desperate plight of millions in Africa’s Lake Chad basin, called for international solidarity.

The crisis affected a number of countries, including Nigeria, Cameroon, Chad and Niger.

Expressing regrets that the condition of the victims of the insurgents was dire, he said: “I wish I had good news, but I don’t. About 11 million people are in desperate need of humanitarian aid; 7.1 million of them are severely food-insecure.

“To say ‘food-insecure, according to World Food Programme, is that they are living on the edge, surviving on, if they can, one meal a day.”

Lanzer described as “particularly worrying”, the situation of the children.

“Some 515,000 children are severely and acutely malnourished and their lives are at risk if aid does not reach them urgently,” he continued.

“No government on earth can do what it takes to confront these numbers of severe food insecurity.

“This is a clear case where international solidarity with the governments of the region is needed,” he stressed.

According to Lanzer, the Sahel region already has about 2.5 million internally displaced persons, and the improving security situation in the Lake Chad Basin region had revealed the depth of the humanitarian suffering of survivors of the destructive insurgent group.

“The scale of humanitarian suffering in the region has become increasingly evident with improving security situation as a result of the military campaign against Boko Haram.

“This has allowed humanitarian actors to reach many places, which were impossible to get to earlier due to insecurity.”

Lanzer regretted that following the improved security situation, he personally saw communities that were totally destroyed by Boko Haram insurgency and some age-grades completely wiped out, particularly the aged and infants as a result of the years-long insurgency.

“We saw towns and villages that were totally destroyed. Places that were completely cut off for over three years, and places devoid of children between two and four years old because they had died.”

TWITTER @thecableng
Copyright 2020 TheCable. All rights reserved. This material, and other digital content on this website, may not be reproduced, published, broadcast, rewritten or redistributed in whole or in part without prior express written permission from TheCable.
Tags
boko haramUnited Nations
Advertisement