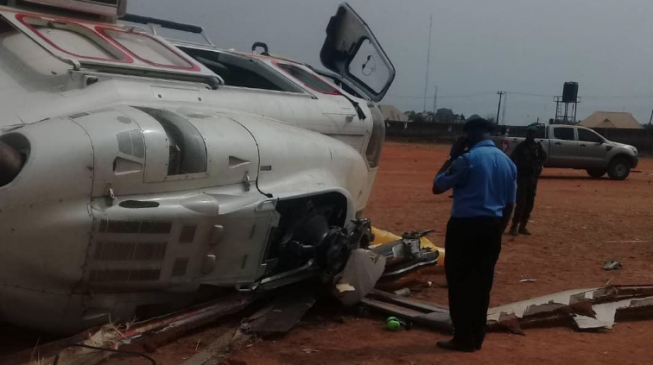 21:24 2019
Print This Article Share it With Friends
👤by Chinedu Asadu  0 Comments
Advertisement

The helicopter which conveyed Vice-President Yemi Osinbajo from Abuja to Kabba in Kogi state, crash-landed as a result of unusual weather condition.

Caverton Helicopters, owners of the aircraft, said this in a statement issued on Saturday.

Osinbajo was on a campaign trip to Kogi when the chopper crash-landed in Kabba. There were no injuries recorded during the incident.

The vice-president came out unhurt and immediately continued his business in the state, receiving a warm welcome from residents as he was driven through the town.

“An Augusta AW139 Helicopter, under management by Caverton Helicopters was involved in a mishap on landing in Kabba, Kogi State around 3pm today (2nd February 2019) as a result of unusual weather conditions,” he said.

“There were no injuries to the passengers or crew on board and they were all quickly and safely evacuated.

“The relevant authorities have been duly informed and an investigation into the incident has commenced. We will, of course, support the authorities as required.:

In a statement, the media team of the vice-president also confirmed that investigation was underway.

Lalolu Akande, media aide of the vice-president, said Stephen Ocheni, minister of state for labour, senior presidential aides, security officials and the crew were on board the ill-fated aircraft.

“We are grateful to God for His protection and safety, and we thank the crew and security personnel for their prompt response and service. We are also grateful for the tremendous expressions of concern and affection, as well as prayers from all,” he said in a statement.

“As is procedural, a full investigation into the causes of the incident would be conducted by aviation authorities.”

The crash was the second the vice-president was involved in within eight months.

TWITTER @thecableng
Copyright 2020 TheCable. All rights reserved. This material, and other digital content on this website, may not be reproduced, published, broadcast, rewritten or redistributed in whole or in part without prior express written permission from TheCable.
Tags
crashVice President Yemi Osinbajo
Advertisement