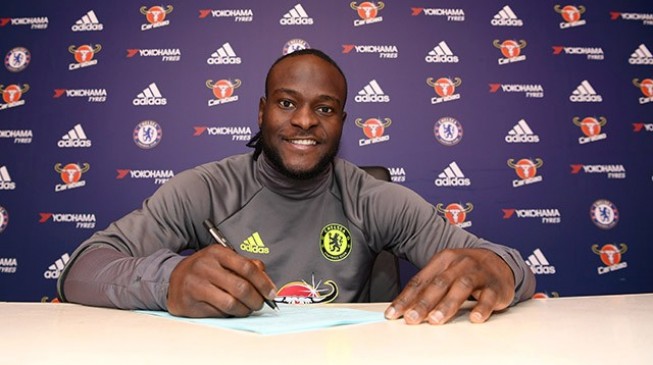 15:18 2017
Print This Article Share it With Friends
👤by Remi Sulola  0 Comments
Advertisement

Victor Moses, Chelsea FC winger, has been rewarded for his sterling performance this season with a two-year contract extension.

The 26-year-old Nigeria international’s previous deal was due to expire in 2019 but Moses has now extended his stay until 2021.

The wing-back has been one of the stars of the Blues’ season and has played a key part in the league leaders’ title charge.

Moses, a £9m signing from Wigan in 2012, appeared to be down the Stamford Bridge pecking order after being loaned out for three straight seasons before Antonio Conte’s arrival.

After impressing Conte in pre-season to force his way back into the Blues’ set up, the versatile Nigerian has become a regular since Chelsea switched to a 3-4-3 formation.

Moses has made the right-wing-back spot his own and has started every league game since October.

His impact and growing importance to Chelsea is underlined by the fact that his terms have been upgraded just 18 months after he signed his previous new deal.

He signed a four-year, £45,000 a week deal in September 2015 but the Blues have been quick to offer him another improved deal to reflect his new status as a first-choice pick fo Conte.

“I feel very excited. I’m delighted to be here for another few years now and to sign a new deal,” Moses said.

“Now it’s time to concentrate on the team and keep working hard to make sure we win games and try to win the Premier League this season.

“We’re having a great season, I’m enjoying my football and we have a good manager here that has given every single one of us confidence.

“I just want to keep on enjoying it and working hard for the team.”

Michael Emenalo, Chelsea technical director said, “We are extremely pleased Victor has chosen to extend his contract with us.”

“He is enjoying an excellent season and, under Antonio’s leadership, has proved to be an important member of the squad.

“This new contract is testament to Victor’s hard work and dedication to succeed at Chelsea and we believe he will be a big part of our future success.”

TWITTER @thecableng
Copyright 2020 TheCable. All rights reserved. This material, and other digital content on this website, may not be reproduced, published, broadcast, rewritten or redistributed in whole or in part without prior express written permission from TheCable.
Tags
Antonio ConteChelseaEPLMichael EmenalonigeriasportSuper EaglesVictor Moses
Advertisement