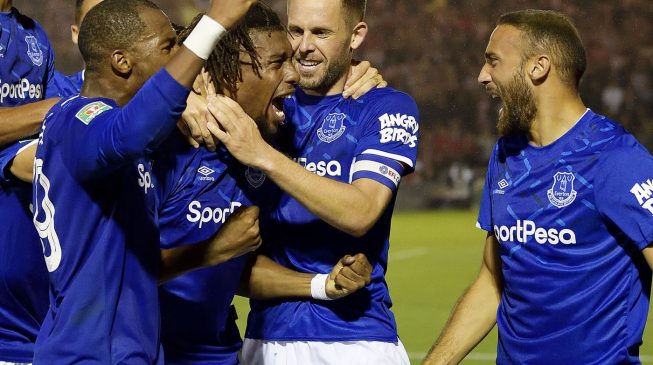 13:52 2019
Print This Article Share it With Friends
👤by Remi Sulola  0 Comments
Advertisement

The Marco Silva’s boys edge Wolves 3-2 at the end of 90 minutes of play.

The 23-year old Nigerian also scored his first goal for the Toffees in last week’s Carabao cup game against Lincoln.

Things went a bit goal crazy early on as there were three goals in 12 minutes.

Romain Saiss jabbed home to cancel out Richarlison’s goal in the 9th minute to level up for Wolves.

In a “just onside” Gylfi Sigurdsson got away down the right and arrowed in an absolutely splendid cross that Alex Iwobi, craned his neck and headed past Rui Patricio superbly in the 12th minute of play to restore Everton’s lead.

Chances came and went for both teams after, too but the game finished 2-1 at the of first forty-five minutes.

Both defences look vulnerable to crosses – surely more goals to be expected in the second half.

This is the first time there have been three goals inside the first 12 minutes of a Premier League game since Everton Vs Leicester in April 2017 (minutes 1, 4 and 10) – that game also took place at Goodison Park.

Raul Jimenez equalized for Wolves in the 75th minute.

Fives minutes after, Richarlison scored his second of the afternoon to hand Everton the lead once more.

The 3-2 win over visiting Wolves is a six straight wins at home for Everton.

With only four Premier League games played, Everton climbed to fifth on the table, while Wolves remained in 17th and without a league win.

TWITTER @thecableng
Copyright 2020 TheCable. All rights reserved. This material, and other digital content on this website, may not be reproduced, published, broadcast, rewritten or redistributed in whole or in part without prior express written permission from TheCable.
Tags
2019/20 English Premier LeagueAlex IwobiDe Andrade RicharlisonEvertonMarco SilvaSportWolveshampton Wanderers
Advertisement