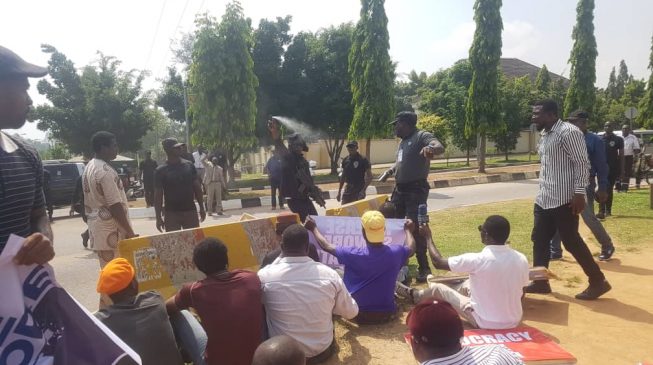 13:39 2019
Print This Article Share it With Friends
👤by TheCable  0 Comments
Advertisement

There was chaos on the premises of the Department of State Services (DSS) in Abuja on Tuesday as security agents shot at protesters who had converged in the area to demand the release of Omoyele Sowore, pro-democracy activist and publisher of Sahara Reporters.

The DSS has refused to comply with the order of a court for the release of Sowore.

The protesters scampered for safety as the DSS agents fired shots indiscriminately.

Earlier, Deji Adeyanju, convener of Concerned Nigerians, said he was offered N1 million by some unidentified persons to suspend the civil action.

He displayed the cash before journalists during the protest.

He said the money was offered to him at gunpoint and that his life threatened.

TWITTER @thecableng
Copyright 2020 TheCable. All rights reserved. This material, and other digital content on this website, may not be reproduced, published, broadcast, rewritten or redistributed in whole or in part without prior express written permission from TheCable.
Tags
DSSSowore
Advertisement