We are facing severe funding gap, says UNHCR on plight of Cameroonian refugees 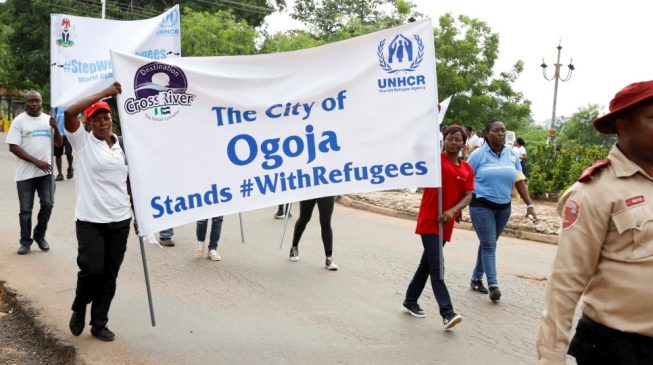 10:48 2019
Print This Article Share it With Friends
👤by Chinedu Asadu  0 Comments
Advertisement

The United Nations High Commissioner for Refugees (UNHCR) says it is facing “severe funding gap” regarding the plight of Cameroonian refugees in Cross River state.

The organisation said this while responding to TheCable’s inquiry on the condition of the refugees in the state.

TheCable had reported how some of the refugees complained about their “poor living conditions” both in the settlement camps and in host communities.

Those in the camps complained that they hardly get aid such as food and money while those in the host communities said they had been “forgotten.”

There were also complaints of refugees’ names missing from the list of beneficiaries of the monthly cash-based intervention of N7,200.

Tony Aseh, UNHCR reporting officer in Ogoja, Cross River, where most of the refugees are staying, told TheCable the organisation had received only $16 million in contributions from donors out of its $44.6 budget for the refugees.

“Regarding payment of cash for food (or Cash Based Intervention for food), UNHCR is facing a severe funding gap that makes cash distributions unstable,” he said in a mail response to TheCable’s inquires.

“Again because of limited funds, UNHCR is prioritising assistance to refugees in settlements and struggling to do so.”

On the refugees’ complaint that their documentation process is usually strenuous and takes time, Aseh said this is an “ongoing process.”

“Please, understand that the refugees are moving back and forth from one site to another and if they report to a site where they were not initially registered, they may not be easily identifiable,” he added.

“But we are working on ensuring that all refugees are easily identifiable even as they move back and forth from host community to the settlements.

“The registration process is on-going and there is a process to correct errors for refugees that do not have their names on distribution lists.”

The ongoing crisis in Cameroon began after the Anglophones declared independence and created a new nation called Ambazonia.

At least 1,800 people are reported to have been killed in the crisis with 530,000 internally displaced. Out of this number, 39,602 are in various parts of Nigeria, including Cross River, Akwa-Ibom, Benue and Taraba states.

TWITTER @thecableng
Copyright 2020 TheCable. All rights reserved. This material, and other digital content on this website, may not be reproduced, published, broadcast, rewritten or redistributed in whole or in part without prior express written permission from TheCable.
Tags
CameroonCameroonian refugeesrefugeesUNHCR
Advertisement