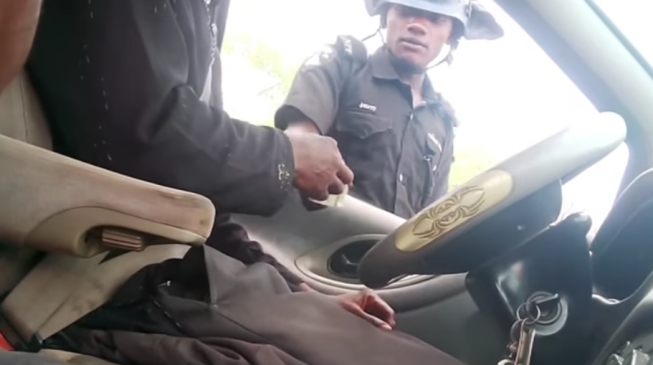 16:07 2020
Print This Article Share it With Friends
👤by Contributor  0 Comments
Advertisement

“This is unacceptable, how can you subject people to this kind of torture all in the name of National ID card? And you are all here collecting N500 and N1000 from poor travellers who don’t have a national ID card.” ~Borno State Governor, Babagana Zulum.

Last week, Governor Babagana Zulum was forced to express his displeasure at the misconduct of security operatives along the Maiduguri-Damaturu highway where thousands of travellers were stranded at a checkpoint while the soldiers and police officers extorted hapless commuters.

The reactions to the tweet I read were even more disheartening. Hassan M Kabir tweeting @Hassan_m_kabeer narrated his own experience as he replied that “I have witnessed same along Maiduguri-Dikwa-Gamboru road where Soldiers and Immigrations torture and collect money(500) from travellers that don’t have National I.D card and collect 1000 from foreigners that have int’l passports with visas too. While another person @MBMAMMAN1 stated that “ In Baga ( lake Chad area) soldiers have displaced civilians and become middlemen in the business of smoke fish where they make huge profits. These soldiers will never wish to see the end of Boko Haram”.

Sad tales which have become all too familiar among Nigerians. Never mind that the entire North-East zone is conflict-ridden, it has also turned into a major source of filthy lucre for many politicians, government workers and civil society organisations. Some Nigerians just couldn’t care less about the situation, their corrupt practice must be carried on regardless. And the biggest culprits are police officers.

Ours is a police force that has been labelled the most corrupt institution in the country. A 2019 survey by SERAP revealed among other things that “a bribe is paid in 54 per cent of interactions with the police”. With a 63 per cent probability that an average Nigerian is asked to pay a bribe on each interaction with the police. Putting it starkly, two out of three persons are likely to part with money on any dealings with the police.

Ordinary Nigerians attempting to make precarious ends meet as petty traders, commercial vehicle drivers are accosted on a daily basis by armed police officers who demand bribes from them. These daylight robberies are mostly perpetrated at illegal checkpoints littered along our roads.

This unchecked menace is such that the average Nigerian especially the mobile young men anticipate a raw deal from the police each day. As one who has a life injury from police brutality, I sometimes skip armed robbers but never forget to include protection against “bad policemen” in my prayers whenever I hit the highway. Oh Yes, because the probability of meeting bad policemen on the highway is a certainty.

Many of us have been pulled over at a police checkpoint for driving in a car considered too fanciful by a police officer. You can be arrested for owning a smartphone, a laptop or for your hairstyle, hell you can even be pulled over for having a beautiful partner on the passenger’s seat.

It is unfathomable that in 2020 a police officer could raise a weapon because of a fifty naira bribe but it is still a daily occurrence and we only get to read about the ones that turned tragic. Nigerians on the streets can tell you that the social media narrative and reactions to these illegalities are somewhat a simplified, perhaps even oversimplified representation of a deeper problem because truth be told, our policemen commit murder daily. A trip to any Special Anti-Robbery Squad headquarters will leave you shaken by the palpable atmosphere of visceral pain, torture and horror.

Successive IGPs assume duties with a maiden announcement on the abolition of illegal checkpoints yet these national eyesores remain along our highways. Over the yuletide, many people posted updates on the number of checkpoints between Lagos and Onitsha. Some counted 40, others 50 and even 60 but none less than 40. That works out to about one checkpoint per 15 kilometres even though a lot of these checkpoints are ridiculously located within a kilometre of each other.

Of particular note is the Benin axis where members of the SARS have gained international notoriety for abducting commuters at gunpoint and extorting huge sums from them. Countless incidents have been exposed with shocking revelations that some of these rogue officers have POS machines on the highway.

A few times the police have been forced to act. However, informing Nigerians through informal tweets that an incident is being investigated is not enough. There is practically no punishment for errant officers as we rarely hear of any prosecution except for the few cases that gained national attention. Nigerians want them prosecuted and punished accordingly.

Undoubtedly our police force is understaffed, undertrained and definitely ill-equipped to handle the pressure of securing 200m lives. Nevertheless, this institutional dysfunction has not prevented them from establishing an elaborate and organised hierarchy of corruption via unrecorded ‘returns’. I wonder who trained them in virtual bookkeeping and cloud computing. An ex-police officer once told me that reforming the police should start with the police college where cadets are informally coached in methods of intimidation and extortion. You can see that we are dealing with an inveterate problem here.

At the peak of the public outcry against police brutality in August 2018, Vice President Yemi Osinbajo ordered the reformation of SARS. Yet almost 2 years on all these directives have amounted to nothing. This situation cannot and should not continue deteriorating.

Some have argued that the crime rate on our roads dropped because of the presence of policemen. But this is very much debatable, as we cannot point to any statistics that support this claim. What’s more, our roads are rarely devoid of roadblocks so how can we possibly make a valid evaluation of the crime rates?

While there are innumerable postulations on how best to reform the police little emphasis have been placed on advocacy which is a crucial ingredient in this battle. Many of the bad officers who besmirch the image of the police are emboldened by a society where the abused masses have become too scared to raise a finger in protest.

But here is the thing. People are usually more motivated by those they regularly interact with. So an articulate campaign sustained through widespread advocacy can bring about a change in the attitude of a docile populace who have little faith in the government.

Unfortunately, besides Awosanya SEGA L’éveilleur®, Abdulmahmud and a handful of others, I cannot name any person or group that is seriously committed to tackling this malady. Even those mentioned often come under scathing attacks from Nigerians for expressing a different political view. We have become so politically fragmented that we cannot unite to fight a scourge that doesn’t give a hoot about partisan divides.

Surely that is not good enough. We need more CSOs, lawyers and most importantly citizens to stand up and be counted. I find it shameful that a lawyer in Lagos will be the first to respond to reports of police brutality in Enugu.

Each region, state and local government should have self /crowd-funded advocates for the purpose of checking the police in the area. Those in the diaspora should also support this move since there is no fear of victimisation on our part. I have decided to allocate more resources for this objective and I urge Nigerians to do the same. We will not only be checking extortion and brutality but will equally be honouring the sacrifice of many good officers within the police force.

Can you imagine the impact of a gathering of over 800 volunteer advocates in Abuja? Comprising mostly lawyers and self-employed persons from the 774 local governments areas, states and regions united under one cause. Backed by a strategy of consistent media focus the government will be forced to act. They will be left with no choice. Because truly, our leaders are neither oblivious of this perennial cankerworm nor the appropriate reforms to overhaul the police force, its just that they are unwilling to commit the huge resources required.

TWITTER @thecableng
Copyright 2020 TheCable. All rights reserved. This material, and other digital content on this website, may not be reproduced, published, broadcast, rewritten or redistributed in whole or in part without prior express written permission from TheCable.
Tags
Police
Advertisement