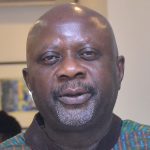 The meaning of this title–one must admit–wouldn’t have been different in the very least were the word “still” to be conspicuously absent. But its insertion is necessary not only to give effect to the context of this piece but as an expression of dismay that some people, most specifically in the political class and their appendages, are still afraid of Dr. John Kayode Fayemi, the governor of Ekiti State when they should have since relieved their minds of this debilitating stronghold. This is because Fayemi, ever since his embrace of politics as a tool for social engineering (or re-engineering), has always deployed this tool to build–and never to destroy.

So, when The Nation newspaper “revealed” on Sunday, December 15, 2019 “How Borno gov aborted plot by Fayemi, El-Rufai to sack Oshiomhole” on its front page, one knew, instinctively, after reading the badly disjointed concoction that shouldn’t have qualified to be on the “front page” in the first place, that another efforts at deconstructing Fayemi has started. It is not that attempts at Fayemi’s political deconstruction shouldn’t be expected. But it that came sooner than expected. After all, one knew that the wagons are surreptitiously being circled about a couple of weeks prior to this front page ‘revelation’ when Sam Omatseye, the newspaper’s ace columnist, fired the first salvo by calling out Gov. Fayemi in his weekly column on Oshiomhole’s imbroglio with his erstwhile protégé and successor Gov. Godwin Obaseki of Edo State. But before one draws the attention of the readers to some of the gaping holes in what the newspaper believed to be an exposé, it is not only important to mention here that the attempt to politically castrate Fayemi, once again, has everything to do with the 2023 presidential election in which it is already considered a given in some socio-political circles and a segment of the region’s intelligentsia, that a major political figure in the Southwest geo-political region will contest for the highest political office in the land. It is also to bring into the fore the political antecedents of Fayemi which, absolutely does not lend credence to both the subtle and overt narrative that The Nation newspaper seems to be advancing.

First, it should be made abundantly clear that this intervention should not be construed as overly defending the governor of Ekiti State as that would be usurping the responsibility, if not the function of the stars that have always conspired to rise in his defense by throwing him up at auspicious times to enhance the country’s political space and governance architecture by a combination of robust ideational adroitness and developmental indices. The 2023 race in which the Southwest geo-political zone is (and should be), a major contender for the exalted office will not be an exception should Fayemi be interested. Rather, it is to point it out that the whole purpose of the inconsistencies in the story and the subtle and insidious insinuations are shabbily crafted to achieve two main mischievous objectives. The readers are wont to shrug their shoulders at the third because it already has precedence.

The newspaper narrative–it seems to me–was meant to perceive Fayemi, particularly in his Southwest region, as a latter-day political equivalent of Chief Ladoke Akintola (Awolowo’s main political rival) who can be so unscrupulous in his political ambition that the collective political interest of his geo-political region means very little, if nothing to him. The purport of the narrative was also tailored to discount Fayemi’s influence with the Nigerian president as the Oshiomhole’s shenanigan and the shellacking meted out to the so-called pro-Oshiomhole’s group in which the Ekiti State governor was supposedly the smooth operator was so astounding that Buhari is now wary of him. This is farther from the truth.

For starters, The Nation’s story was suspect–ab initio–in the sense that a “revelation” of that magnitude was authored by Lawal Ogienagbon, the Managing Editor of a Lagos-based publication. For an event that manifested at no other place than the Federal Capital Territory (FCT), one must wonder why the reportage did not emanate from the desk of Yusuf Alli, the newspaper’s Abuja Bureau Chief to at least give some semblance of credibility. Ogienagbon must have single-handedly decided that both the pro- and anti-Oshiomhole dramatis personae could not be more than four on both sides of the divide despite that other governors were reported to be at the meeting in which President Buhari was the judge. Why the author held back the names of other players on both teams can only be imagined. What is more, the pro-Oshiomhole team can be accused of not adhering to the federal character principle as players are mostly from the Southwest geo-political zone except Zulum, the striker who is from Borno State. This not only calls into question the motive of the newspaper but the needless repetition of Babajide Sanwo-Olu (Lagos), Dapo Abiodun (Ogun) and Gboyega Oyetola (Osun) as the governors on Zulum’s team and the statement credited to the governor of the State of Osun leaves much to be desired.

To be sure, while Fayemi has not made any public pronouncement that a political discord is in existence between him and Comrade Adams Oshiomhole, the APC chairman, it is not inconceivable that–in any human organization, and Nigeria’s wooly political associations for that matter–political skirmishes with a highly principled political figure such as Fayemi may sometimes be inevitable and by virtue of his huge, almost unprecedented investments in the party. The APC as a political organization is not (and should not) be an exception. What is more, Fayemi has absolutely nothing to gain and everything to lose as not only a critical stakeholder and governor under the party’s ticket, but the current Chairman of Nigeria Governors’ Forum (NGF) should the party unravel. He cannot be a party to the party’s disintegration as this would be a major blot in his leadership credential if this should happen under his watch.

The aforementioned aside–and without any fear of contradiction–Fayemi has significantly contributed (and continues to do so) to the unity, strength and cohesion of the All Progressives Party since its birth as he has had to douse several (sometimes raging) fires that threatened the party’s growth that the dexterity with which he appealed to warring factions in the party to sheathe their swords from Akwa Ibom to Zamfara states (and states in-between) can be likened to the political equivalent of a mercenary whose services were sorely needed when a war was going bad. Are you having intractable political problems in your state that must be solved for the good of APC? Fayemi will travel! He has maintained the highest fidelity to his principles without them being seen as threats to anyone in the polity. And this has always set him apart from the pack.

It would be recalled that Fayemi, in both his capacity as the NGF chairman and his understanding of the nation’s constitution, was unequivocal in telling the federal government in which he is not only an integral part that drives the Buhari presidency, but someone in whom the president is well pleased that the federal government erred and had committed illegality to have supported Local Government autonomy as, in his view, the constitution recognized a two-tier government and not a three-tier as currently being canvassed by the federal government. This stance, however, was to the discomfiture of many who believes, and with some justification, that political parties in this polity are still significantly immature and that they have no skin for public dissensions among their members no matter how highly placed if one must ascend. The same Fayemi also barked at the federal government-supported RUGA settlement (now suspended) that it (the Fed) has no land in the states as all lands are vested on the state, again, by the constitution–just to cite these two examples. So, if Fayemi was not accused of sabotaging the central authority with these public pronouncements, it beggars belief why The Nation newspaper would suggest that the Ekiti State governor was trying to destroy the party because of a perceived 2023 presidential ambition when there’s no scintilla of evidence that such is the case.

Nigeria’s 2023 presidential race is–and should be–the least of the worries of a Chief of State who has been busy traversing the length and breadth of the polity and the international community since the beginning of his second coming–sometimes with cap in hand–pleading and appealing to local and international investors to look in the direction of a state that had been badly plundered with reckless impunity and left gasping for breath by his predecessor. Methinks this is where The Nation’s assistance is needed to continually remind not only the country’s political class that power is never entrusted to them by the people so that they can be egregiously violated but to enhance their material conditions while calling for justice to be served. But it should be clearly understood that Fayemi would not only be at the table when the decision as to who flies the APC presidential flag would be taken, but the road by which that presidential election victor of APC would travel to the Federal Capital Territory must necessarily pass through Isan-Ekiti. This may be a longer route from any point in the federation except Ekiti State. But that is just the way it is going to be.

Odere lives in Iropora-Ekiti. He can be reached at [email protected]

TWITTER @thecableng
Copyright 2020 TheCable. All rights reserved. This material, and other digital content on this website, may not be reproduced, published, broadcast, rewritten or redistributed in whole or in part without prior express written permission from TheCable.
Tags
Governor of Ekiti StateJohn Kayode Fayemi
Advertisement