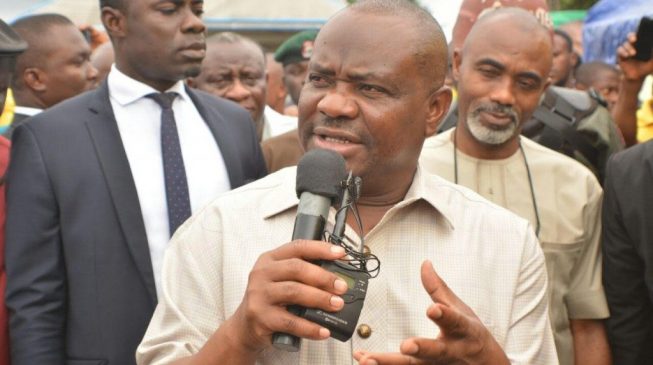 22:06 2019
Print This Article Share it With Friends
👤by Femi Owolabi  0 Comments
Advertisement

Nyesom Wike, governor of Rivers state, says the All Progressives Congress (APC) government is planning to harass 200 judges who are not willing to cooperate.

The governor made this allegation on Sunday at the Greater Evangelism World Crusade in Port Harcourt, the state capital.

Wike said that credible intelligence intercepted by him revealed that a minister told a gathering that following the “destabilisation of the supreme court”, the next target will be the court of appeal and federal high court.

“I intercepted a discussion by a minister of the federal executive council where he was telling a gathering that they are happy that they have dealt with the supreme court,” he said.

“This APC Federal Government has gone to the Code of Conduct Bureau to get the asset declaration forms of 200 judges. Any judge that fails to follow their evil plot, will be harassed with false allegations and persecution.”

Calling on the church for prayers, the governor added that the federal government will generate false allegations to compel upright judges to resign from the bench.

“The Church should continually pray for the federal judiciary. The judiciary in Nigeria is under siege. If anything happens to the judiciary, our democracy is in trouble .

“The Church needs to pray for the judges to remain strong in the face of intimidation and harassment.”

Onnoghen has been standing trail at the Code of Conduct of Tribunal (CCT) over alleged false assets declaration.

TWITTER @thecableng
Copyright 2019 TheCable. All rights reserved. This material, and other digital content on this website, may not be reproduced, published, broadcast, rewritten or redistributed in whole or in part without prior express written permission from TheCable.
Tags
APCGeneral electionjudgesNyesom Wike
Advertisement