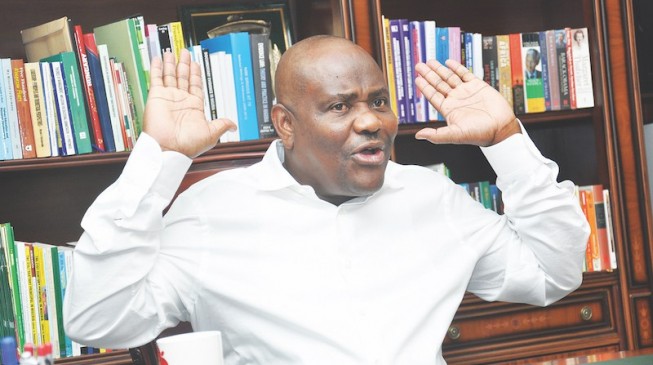 17:27 2020
Print This Article Share it With Friends
👤by Ebunoluwa Olafusi  0 Comments
Advertisement

Nyesom Wike, governor of Rivers, says he will not impose a candidate on the people of the state at the end of his second term.

Wike spoke during a solidarity visit by the Orashi region of the state at the government house, Port Harcourt, on Saturday.

The governor said no one zoned the governorship seat to him but that he struggled for it.

He, therefore, said “power can never be extended as a gift” to any group.

“For the position of governorship if you have the capacity, come out and contest. Nobody zoned governorship to me, I struggled for it, ” he said.

“I will not impose anybody on Rivers people as governor in 2023. I will not do it. I don’t even have that power, not to talk of giving it out. You cannot give what you don’t have.

“To be the governor of Rivers State, you must have the capacity to deliver.”

Wike warned the people against “politics of bitterness” and asked them to support one another to attract development projects to their areas.

“Don’t allow anyone to sow seeds of discords among you. Politics should not divide us. Politics of bitterness does not make sense, “he said.

“All of us must not be in one political party. But you must support yourselves to attract projects to your area.”

He thanked the people for their support and asked them to “remain steadfast in their march towards development”.

He said: “We must be able to work as a people. We will not abandon any projects awarded by the state government. You must work as a team to achieve results.”

TWITTER @thecableng
Copyright 2020 TheCable. All rights reserved. This material, and other digital content on this website, may not be reproduced, published, broadcast, rewritten or redistributed in whole or in part without prior express written permission from TheCable.
Tags
2023Nyesom WikeOrashi regionrivers state
Advertisement