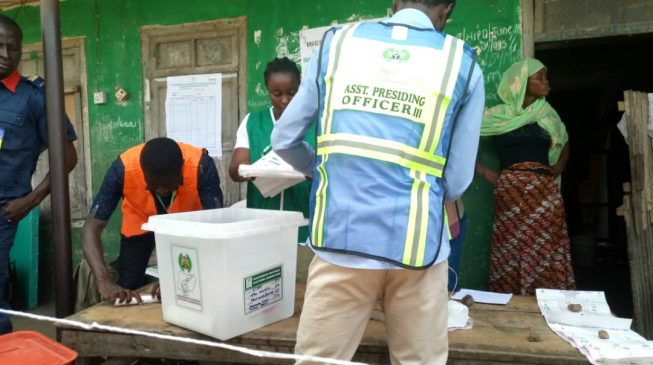 20:29 2019
Print This Article Share it With Friends
👤by Taiwo Adebulu  0 Comments
Advertisement

Rasaki said this on Friday while being cross examined by Adesina Agbede, counsel to INEC, before the election petition tribunal sitting in Abuja.

Rasaki said all the party agents who signed the result sheet (Form EC8D) were present when the decision to cancel the results were taken.

“That led to the cancellation of the results of these polling units,” Rasaki said.

“That was at the point of aggregation of all results from the 30 local governments.

“The returning officer of the state informed that the number of registered voters in these units exceeded the margin between the first petitioner (Senator Ademola Adeleke) and the second respondent (Gov. Gboyega Oyetola).

“The margin showed that the difference is small compared with the number of registered voters and that they cannot be disenfranchised.”

When Rasaki was cross-examined by Lasun Sanusi, counsel to the APC, he said he and other APC polling unit agents discovered discrepancies in some of the Forms EC8A brought to him as the state collation agent of the party.

Rasaki informed Onyechi Ikpeazu, counsel to the petitioners, that he was not present at the collation centres in the local governments and cannot tell the people who corrected the Forms EC8A, B and C.

“Only the local government officers were allowed. Polling unit agents of parties were not present when the decision to cancel result of seven polling units was made,” he said.

Ademola Adeleke, candidate of the Peoples Democratic Party (PDP), had approached the tribunal to challenge the declaration of Gboyega Oyetola, candidate of the APC, as winner of the September 22 and 27 elections.

The tribunal adjourned its sitting to February 5.

TWITTER @thecableng
Copyright 2020 TheCable. All rights reserved. This material, and other digital content on this website, may not be reproduced, published, broadcast, rewritten or redistributed in whole or in part without prior express written permission from TheCable.
Tags
Adelodun RasakiAdemola AdelekeAPCGboyega OyetolaINECOsunPDPtribunal
Advertisement