Women and youth in politics: Closing the gaps 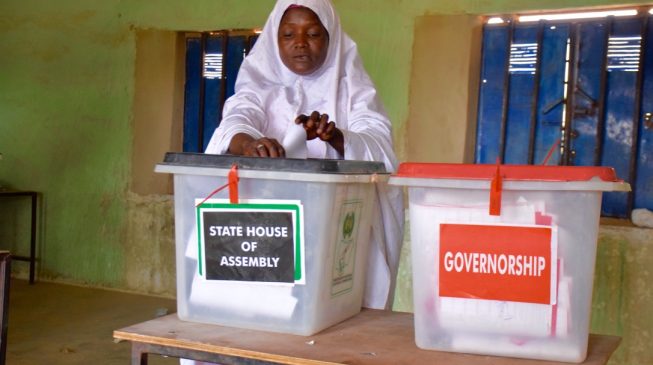 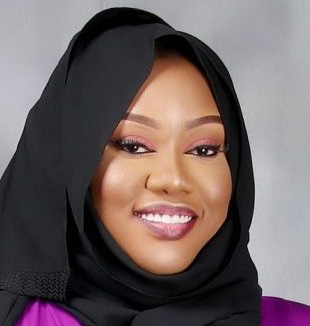 Nigeria’s democracy is unrepresentative. In a country where 18-35-year-olds form the bulk of the adult population, its political scene continues to be dominated by men who are north of this age category.

There are many factors responsible for this social injustice but at its core are the interrelated problems of dated cultural beliefs which presume a lack of wisdom and capacity to lead on the part of the youths and women, especially women. There also exists a system of entrenched inequality which makes effective participation in politics – and by extension, leadership – a tall order for young persons. 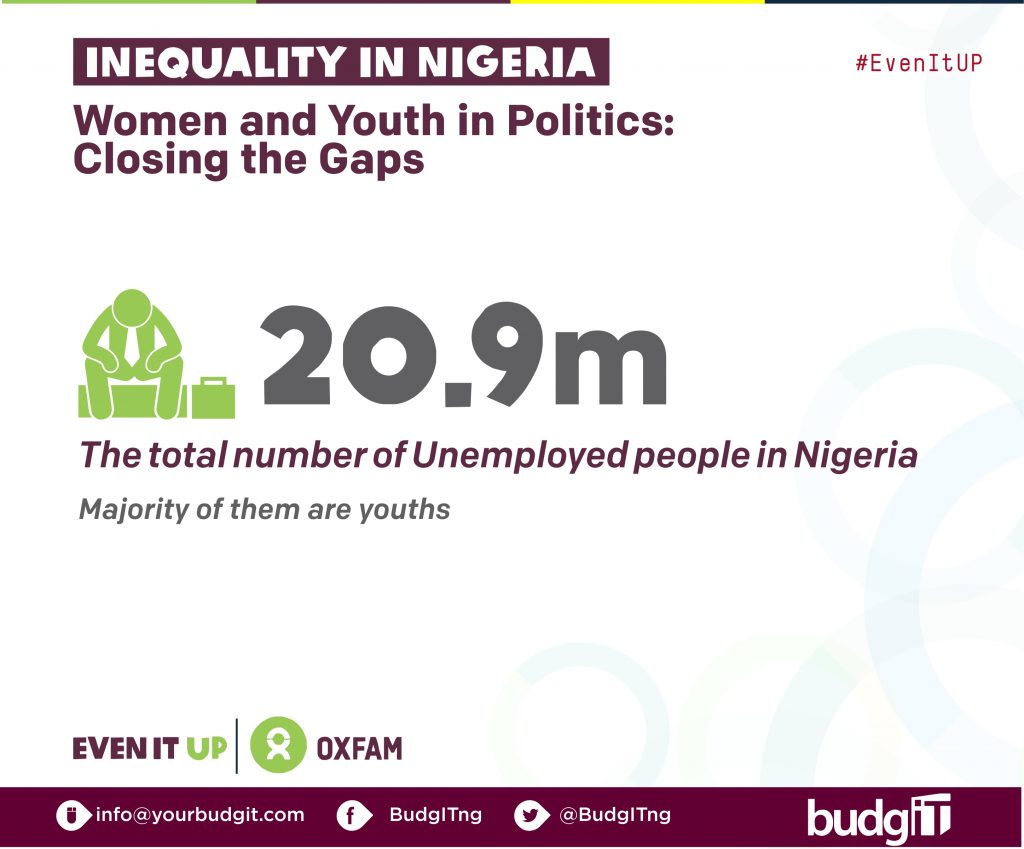 Young people are at the foot of socio-economic indices as opportunities, over the years, have shrunk owing to resource mismanagement and poor investments. According to Oxfam International, between 1960 and 2005, about $20 trillion, an amount larger than the GDP of the United States in 2012, was diverted from the country’s treasury by public officeholders. Investment in critical sectors such as education and health has been typically low, with both sectors collectively accounting for less than ten per cent of the national budget in 2012. The pattern has remained the same since then.

Youths and women bear the burden of this misdirection; unemployment has soared to dizzying heights, a factor denying young people the skill and economic strength to nourish themselves, much less afford the high cost of participating in politics. A high level of illiteracy across the country helps to maintain the survival of dogmas which hurts their chances and provides cracks for older people, notably men, armed with accumulated funds and enabled by a repressive culture, to exploit. 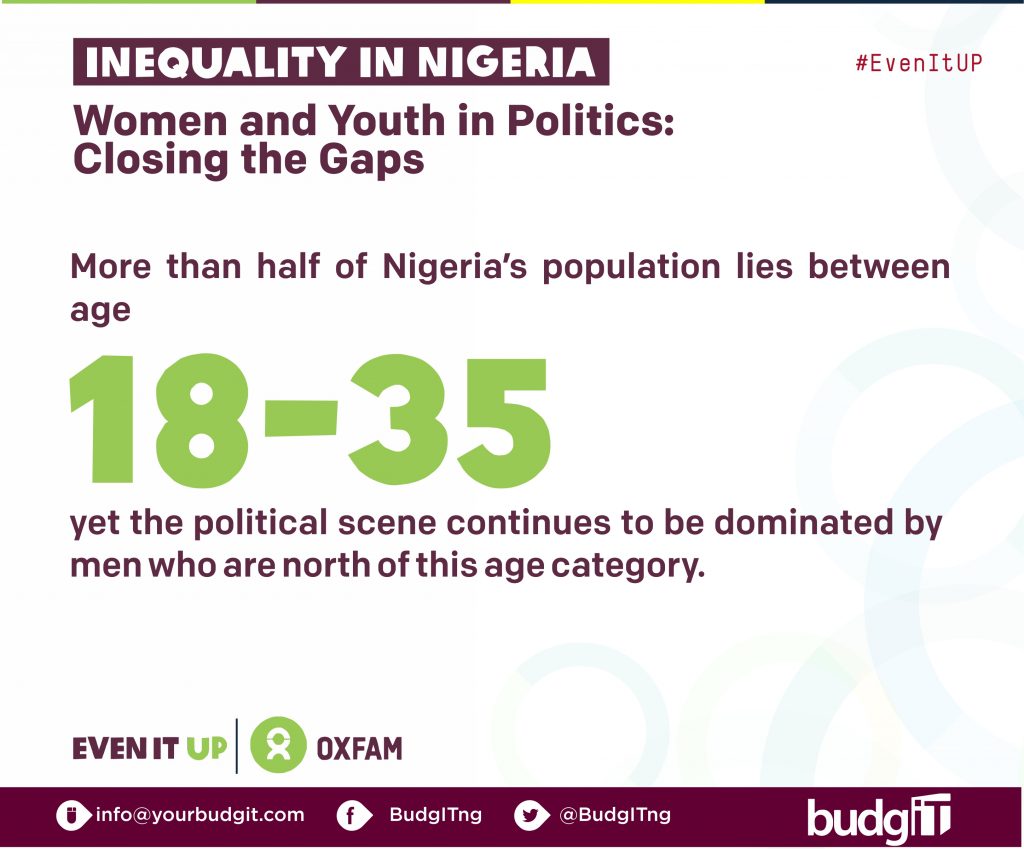 While young people grapple with lack of jobs and women who account for the majority of Nigeria’s rural labour force are both overwhelmingly illiterate and denied economic rights to unlock potentials, a tiny fraction of the population continues to enjoy better fortunes under a sophisticated patronage system and they, aware of the inherent benefits, propel this political arrangement at the detriment of marginalised groups.

These are the odds against the Nigerian youth and many, despondent and cynical, have resigned to fate. Those who try have to gnaw at each other’s feet in a struggle for the declining space assigned to young persons across party lines. Women in politics have to endure sexist remarks and a constant struggle to avoid reduction to mere totems of inclusion with no significant power or influence. 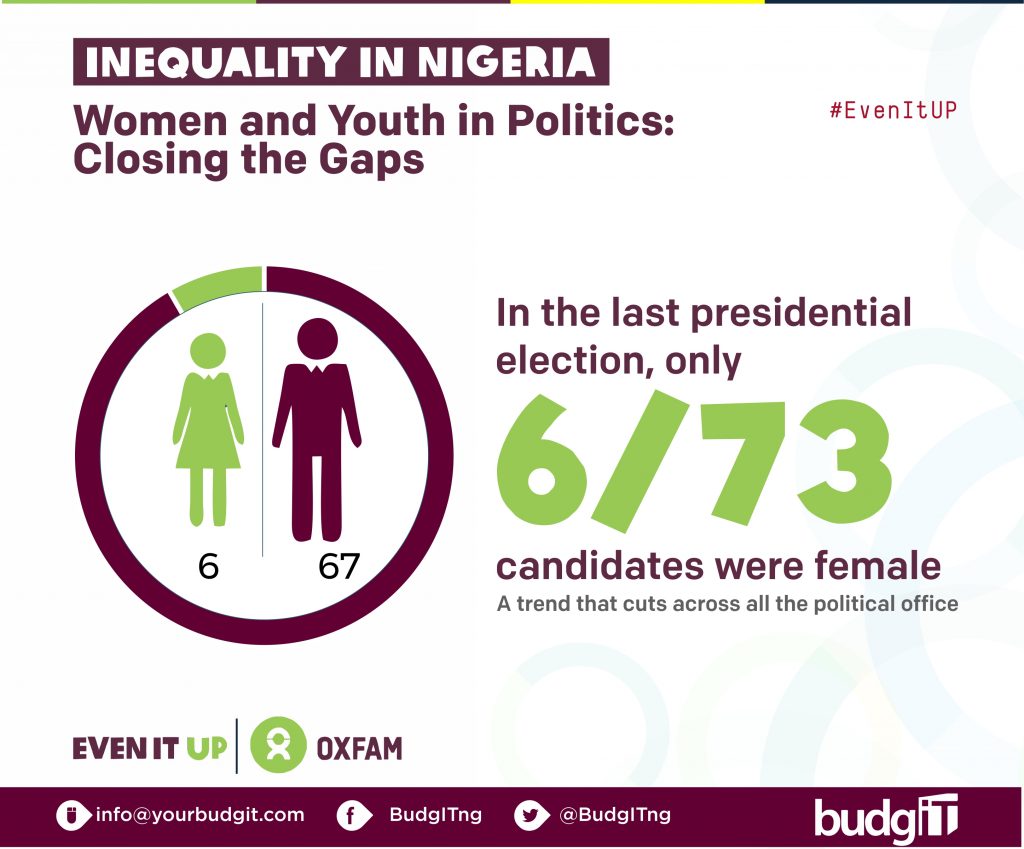 Yet, as evidenced by the passage of the Not Too Young To Run Act, the way to effect change is for young people to come together as a single unit and make demands, demands they need to make if Nigeria is going to make progress. Across the globe, especially in developed nations, the dynamism and innovation of youths in politics and other sectors have been the key drivers of economic growth and prosperity. 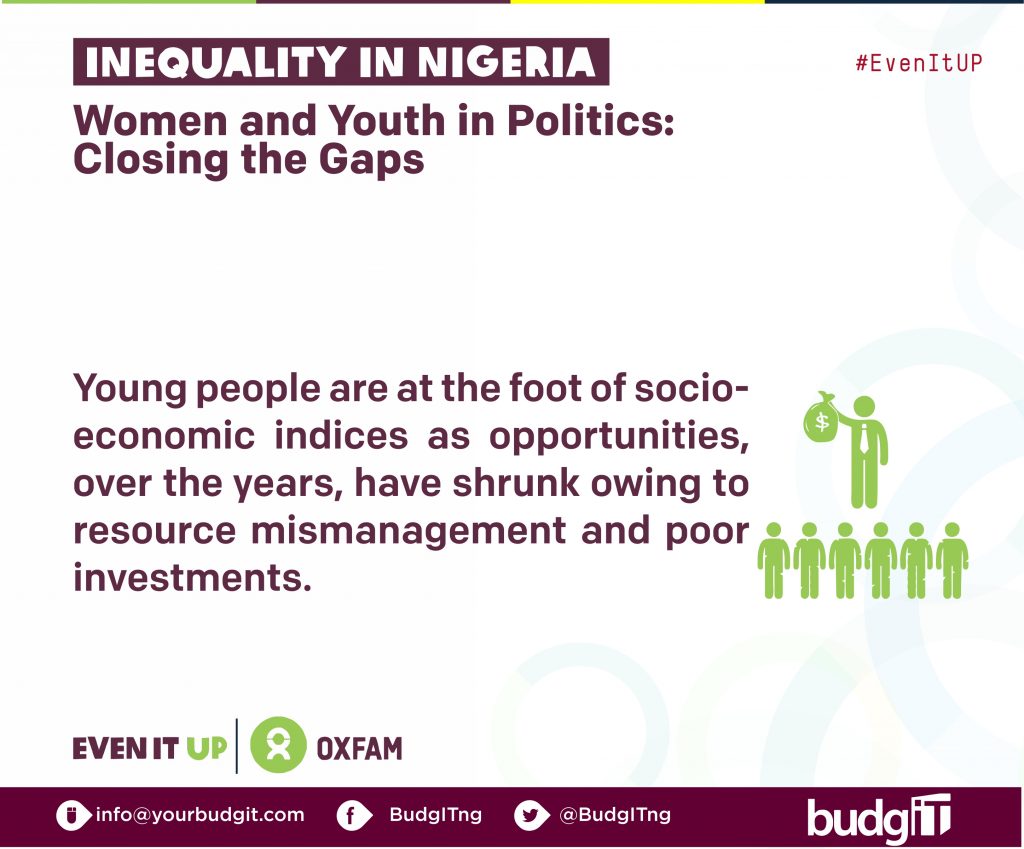 There exists strong evidence that as more women are elected into office, there is a corollary increase in policy making that emphasizes the quality of life and reflects the priorities of families, women, and ethnic minorities. 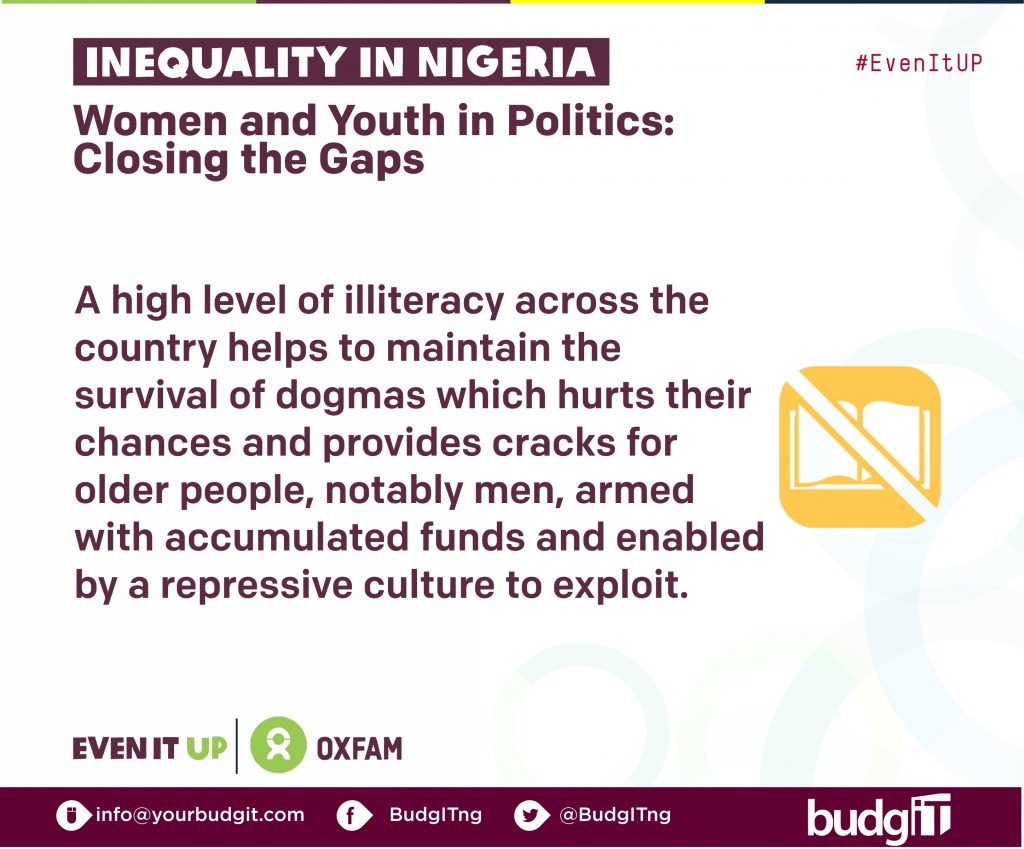 To bridge the gap and give rise to progress in this specific regard, more has to be done beyond laws, which are also of utmost importance. Affirmative action for young persons and women must be instituted and increased to address and atone for decades of injustice. 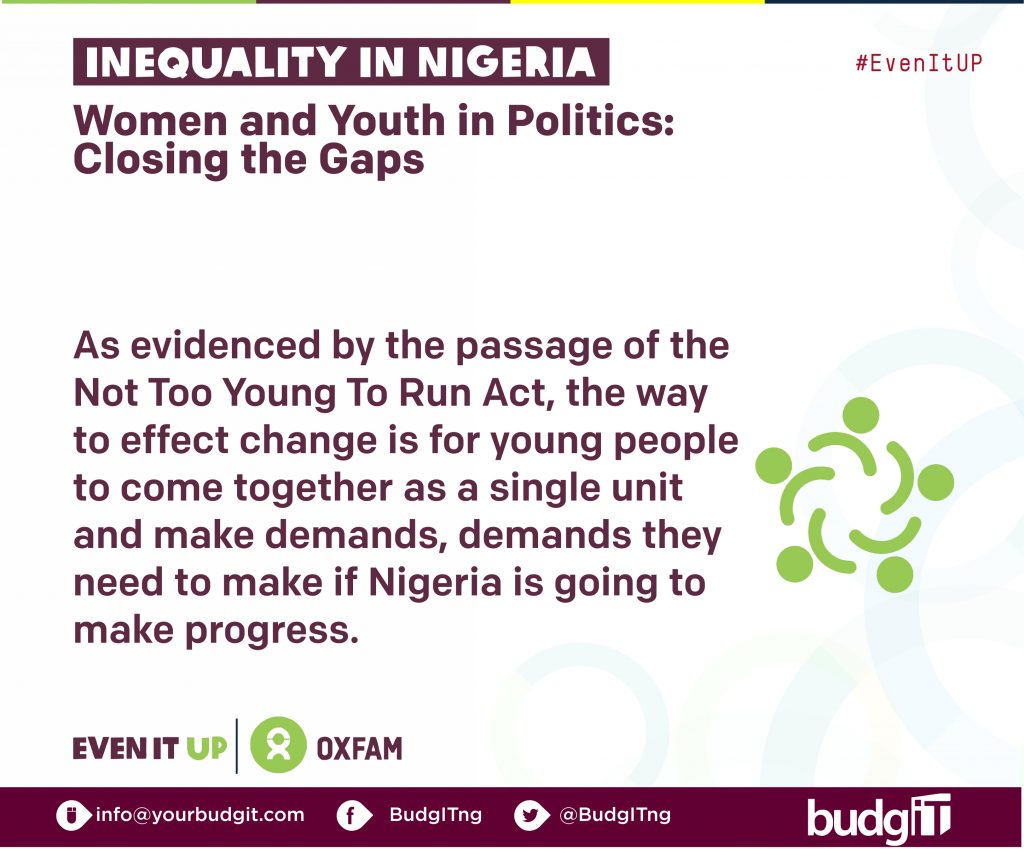 Electoral reforms, with particular focus on campaign finance and spending, must be enforced if truly, we desire to even the playing field and reduce the influence of funds in tipping the scale of elections. This would disincentivize diversion of funds for electoral purposes and force political stakeholders to embark on voter education as they have to campaign and solicit for votes based on ideas. 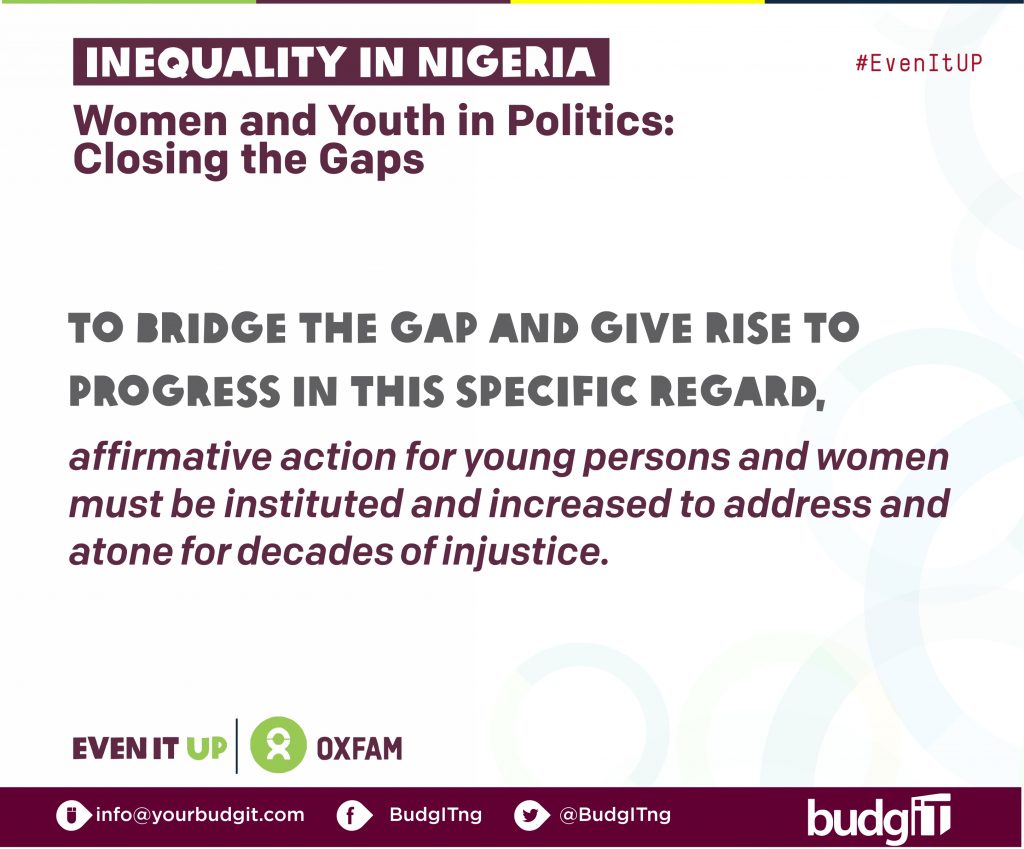 The government must prioritize the empowerment of youth through prudent management of the economy and expansion of opportunities, and commit to eliminating pervasive illiteracy which spurs crime and upholds the misguided belief that a young person, a woman more so, is incapable of leadership.