PROFILE: Asiata, 90-year-old sickler who has 5 children and has gone to Mecca 13 times 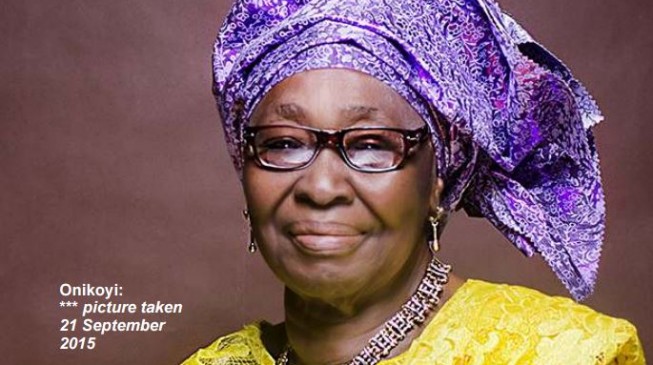 19:03 2015
Print This Article Share it With Friends
👤by Mayowa Tijani  15 Comments
Advertisement

Asiata Onikoyi-Laguda, the woman believed to be the oldest sickle cell patient in the world, celebrated her 90th birthday on November 1, 2015 – a feat that is clearly in defiance of science.

Onikoyi was born in November 1925, at a time when the average life expectancy of people living with sickle cell disorder was just five years.

As recently as 1973, the average lifespan for people with sickle cell disease was only 14 years. Currently, life expectancy for these patients can reach 50 years and over, New York Times reports.

According to a special report by the Sickle Cell Journal, she is the second of four children born by her parents AbdulYekeen Ishola Onikoyi, a prince of the Onikoyi ruling house, and Aishat Alake Onikoyi from Kudeti, Ibadan.

Due to the level of illiteracy at the time of her birth, she was never diagnosed to have had sickle cell; she just had all the symptoms, including terrific pain, which hindered her from going to school till she was 12 years old.

She struggled through primary school, and enrolled at Queens College Lagos, where she met her husband Bolaji Alakija, who went on to become a doctor.

He treated her for sickle cell, but never really told her much about her condition, as it was the culture in their day. Alakija had 27 children, five of which were with Onikoyi and the rest for his nine other wives.

Onikoyi, a devout Muslim, has performed the holy pilgrimage to Mecca 13 times and gone for lesser hajj, better known as Umrah, six times.

She says moderation kept her going and urges other sickle cell patients around the world to toe the same line.

“I have always maintained a middle road in life. Moderation keeps you going, when those who indulge themselves have lost their balance,” she says.

At 90, Onikoyi is under no dietary restrictions whatsoever; she eats salt, eggs, meat, sugar, fried food, as it pleases her.

Her blood pressure is hovering around 160/90, and she says she observed the annual 30-day Ramadan fast until she was over 88, when her children pressured her into giving it up.

Onikoyi says she reads the Bible and Quran everyday, and takes public transport in this “super-chaotic Lagos”.

She lost one of her sons in August 2014, when he was 59 and accepted it as the “will of Allah”. “I prayed to Allah that the rest of my children should outlive me,” she says.

Every year in sub Saharan Africa, more than 300,000 children are born with the sickle cell  disease.

TWITTER @thecableng
Copyright 2019 TheCable. All rights reserved. This material, and other digital content on this website, may not be reproduced, published, broadcast, rewritten or redistributed in whole or in part without prior express written permission from TheCable.
Tags
Asiata Onikoyi-LagudanigeriaSCDSickle Cell Journal
Advertisement