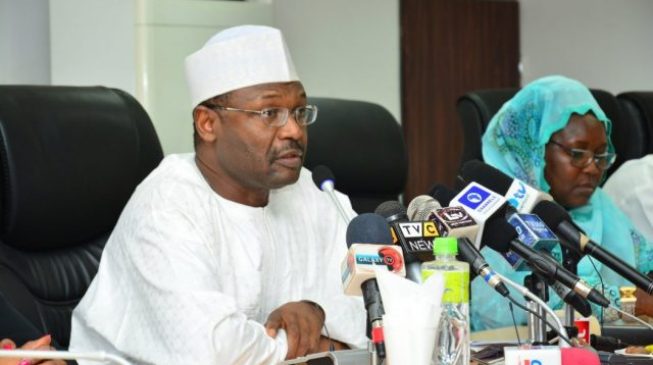 11:16 2019
Print This Article Share it With Friends
👤by Jamilah Nasir  0 Comments
Advertisement

The Independent National Electoral Commission (INEC) says any of the ten fingers — not only the index — can be used for marking the ballot papers when voting.

The electoral body said it got wind of “false reports” that the only the index finger is approved for marking the ballot papers.

It described the rumour as “false”, saying any of the fingers can be used, as long as it does not spill ink beyond the box meant for a party.

“INEC’s attention has been drawn to a fake news making rounds that the index finger is the only finger approved for marking a ballot paper. THIS IS FALSE,” INEC said.

“At the point of registration, all ten fingers were captured. So any finger can be used for marking a ballot paper.

“Make sure that your mark is inside the box of your party of choice and does not stray into another box.”

Meanwhile, Bola Tinubu, a national leader of the All Progressives Congress (APC), had told supporters on Saturday during the party’s presidential mega rally in Lagos to use their index fingers to vote.

He had cautioned the people against using their thumbs, warning that the ink may spill over and cause their votes to be void.

“To print seventy something ballot, you know the space will now become small, so don’t use this thumb. Use this finger, index finger. Use the finger you use to lick soup,” Tinubu had said.

“Go to that ink, and go to that space and put it, blow it. Look for broom symbol o, don’t put it on top of the broom. That will be a void vote.

“Put it in that small space and leave and standby until they count your vote. Because if you use your thumb finger, it will spill over to another line. They said they will void the vote. If you use too much ink, a blot to another party creates a problem.”

On Monday, INEC released the sample of the ballot papers to be used in the presidential election on Saturday.

You can view how to correctly vote for your candidate here.

TWITTER @thecableng
Copyright 2020 TheCable. All rights reserved. This material, and other digital content on this website, may not be reproduced, published, broadcast, rewritten or redistributed in whole or in part without prior express written permission from TheCable.
Tags
electionfingerindexINECvote
Advertisement