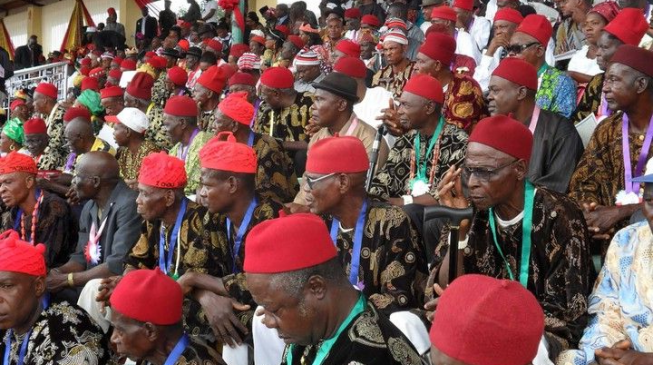 19:35 2020
Print This Article Share it With Friends
👤by Jamilah Nasir  0 Comments
Advertisement

Sani said this while reacting to an article on the advice of Isa Funtua, an associate of President Muhammadu Buhari, gave to the south-east on its aspiration for the number one seat in the land.

Funtua had asked the Igbo to review their ways of playing politics in order to get the presidency. This had generated different reactions.

But Sani said Nigerians would be too scared to entrust the Igbo with the presidency in 2023 if “they are seen to also be agitating for secession from the federation”.

He described the Igbo as suffering from “superiority and inferiority complexes”,  accusing them of playing both victim and also having a sense of entitlement.

“When I read a letter by one Frederick Nwabufo on page 18 of The Nation newspaper under the caption “Isa Funtua, Igbo and 2023 presidency” in which the author berated Isa Funtua of being an arrogant man who suffers from a sense of entitlement, I wonder the wisdom,” Sani said.

“As far as I am concerned, it is Igbo who is obsessed with a sense of entitlement by their insistence that it is their turn to produce the president in a country which boasts of over 250 ethnic nationalities. Igbos suffer from both superiority and inferiority complexes.

“At one point, they tout their superiority by claiming to be over and above any other nationality in Nigeria because they are better at the use of their superior commercial acumen for trade.

“At another, they play the victim by crying of marginalization the most. Power in a multi-party democracy is never secured through threats and intimidation, nor is it obtained by jeremiads out of pity.

“This is because democracy is a contest of ideas and reason and is never a bullfight.

“Igbos cannot agitate for separation and hanker for president by still expecting the country would not be scared of voting them for the presidency.

“Igbos may wish to recall that Senator McCain lost the elections because he had [Mrs Palin] who was governor of the state of Alaska. This was also because her husband was accused of attending a meeting of separatists who wish the state of Alaska to leave [the] USA and join Russia.

“I do not see how somebody from Scotland, Catalan, Quebec, Aceh or Xinjiang could dream of being voted president of their countries. Reason: Such a person would most likely play Gorbachev.

“So when Isa Funtua says Igbo should belong, he meant “belong to where the majority [is]”. That is to say, Igbo must develop their winning game plan by reaching out to build bridges and break barriers.

“The North does not comprise the caliphate alone but is very diverse. In fact, the caliphate today is not ruled by the ruling party.”

TWITTER @thecableng
Copyright 2020 TheCable. All rights reserved. This material, and other digital content on this website, may not be reproduced, published, broadcast, rewritten or redistributed in whole or in part without prior express written permission from TheCable.
Tags
ACGbiafraIgbopresidency
Advertisement