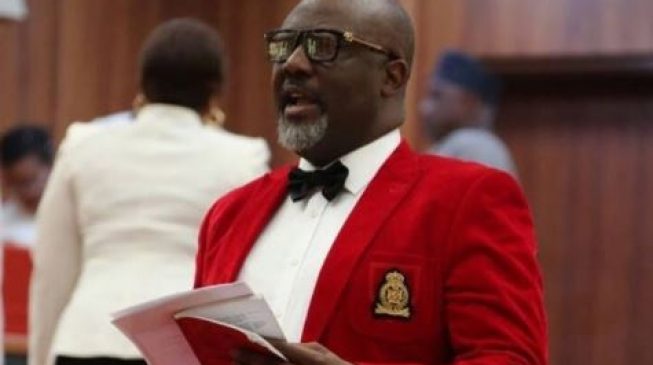 21:00 2018
Print This Article Share it With Friends
👤by Jamilah Nasir  0 Comments
Advertisement

Dino Melaye, senator representing Kogi-west, says President Muhammadu Buhari had the option of returning the 2018 budget to the national assembly if he was displeased with it.

On Wednesday, Buhari signed the bill into law.  He however, expressed reservations about some alterations made by the lawmakers.

The president said the national assembly introduced 6,043 projects and jerked up its budget by 14.5 billion naira.

He also said they reduced the allocation for some projects but that he decided to  sign the bill “in order not to further slow down the pace of recovery of our economy”.

In his response, Melaye accused the president of “trying to whip up sentiments against the national assembly.

He said the lawmakers were not expected to “rubber stamp” whatever the president passed to them.

“What the president is authorised to do constitutionally is to present the National Assembly with a Bill; a Bill is a work-in-progress and not the finished work,” Melaye said.

“Mr. President should therefore refrain from playing to the gallery and milking the naivety of the masses on the issue.

“In any event, he reserves the prerogative of refusing to append his signature to the bill passed if it meets with his displeasure. He is also free to return the bill to the national assembly unsigned with a note indicating his areas of disaffection.

“I also ask, in the last three years of this administration: What has been the percentage of implementation of capital budget? Therefore Mr. President should halt his chicanery and smear campaign of the national assembly.”

TWITTER @thecableng
Copyright 2019 TheCable. All rights reserved. This material, and other digital content on this website, may not be reproduced, published, broadcast, rewritten or redistributed in whole or in part without prior express written permission from TheCable.
Tags
2018 budgetBuhariMelayenational assembly
Advertisement