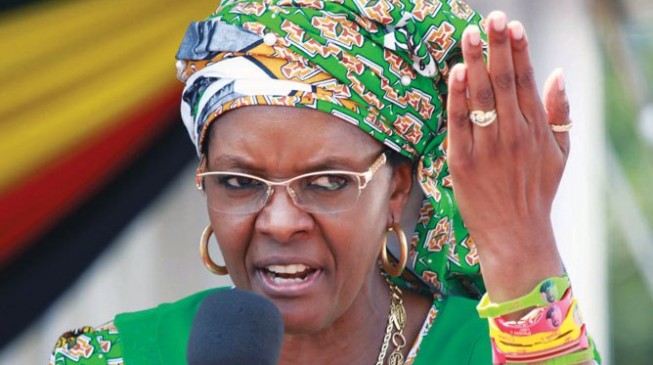 16:42 2017
Print This Article Share it With Friends
👤by News Agency  0 Comments
Advertisement

Four people were arrested on Friday for booing Zimbabwe’s first lady Grace Mugabe while she was addressing a political rally.

Charity Charamba, police spokesman, confirmed the arrest, accusing those in detention of undermining the authority of the president.

“I can confirm the arrest of three adult males and a female,” he said.

“The president of the Republic of Zimbabwe was the guest of honour at the rally and what they did was tantamount to undermining the authority of the president.”

The four allegedly shouted that they hate their president’s wife and booed her when she was speaking in Bulowayo, on Saturday.

If convicted they could face a year in jail.

There has been a crackdown on freedom of expression in the southern African nation in recent months, with a US woman arrested for allegedly calling President Robert Mugabe “a goblin” in a tweet.

Martha O’Donovan, 25, faces 20 years if convicted on charges of subversion.

Ninety-three-year-old Mugabe and his politically ambitious wife are allowing no room for dissent ahead of pivotal elections next year.

This week, Mugabe axed his long-time deputy Emmerson Mnangagwa, who was Grace Mugabe’s main competition in the race to succeed the president.

“Grace is forcing people to accept her. Honestly, one should not be arrested for telling someone that you dislike her,” Mudzengi said.

Mugabe, who has been in power for over 30 years, has been accused of election-rigging, human rights abuses and destroying the country’s once vibrant economy.

TWITTER @thecableng
Copyright 2019 TheCable. All rights reserved. This material, and other digital content on this website, may not be reproduced, published, broadcast, rewritten or redistributed in whole or in part without prior express written permission from TheCable.
Tags
Grace MugabeMartha O’DonovanZimbabwe
Advertisement