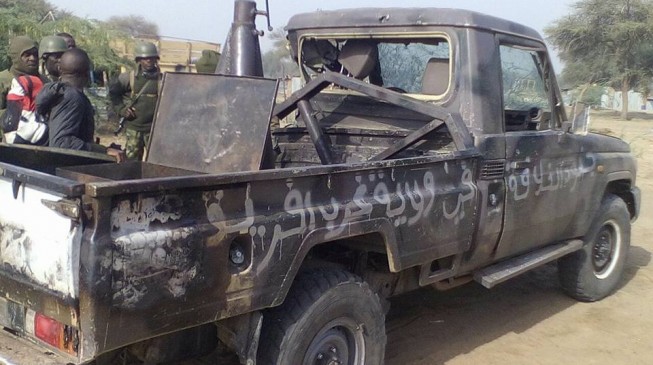 13:05 2018
Print This Article Share it With Friends
👤by Dyepkazah Shibayan  0 Comments
Advertisement

A female suicide bomber suspected to be working for the Boko Haram sect blew up herself at a mosque in the Fulatari area of Buni Yadi, Gujba local government area of Yobe state, on Friday, killing seven persons.

This is just as suspected insurgents abducted three persons in Milidu and Kaya villages in Madagali local government area of Adamawa state on Thursday.

A military source, who confirmed the attack to TheCable, said the incident occurred around 5:30am, when the Muslim faithful gathered to observe the morning (Fajr) prayer.

According to the source, rescue efforts are being made to transfer the injured to the hospital.

“The bomb-blast is real. They lost 7 people in the mosque, 28 injured. It happened this morning by 5:30 prayer. There are still some casualties they are still taking them to the hospital.  That is what I can say for now,” the source said.

The suicide bomber was said to have died instantly while the man who tried to block her from entering the mosque sustained injuries.

TheCable visited the town four years after and spoke with victims and survivors of the attack.

According to Premium Times,scores were injured in the Adamawa attack. An elderly woman was reportedly shot.

Baba John, a resident of one the villages, was quoted to have said the insurgents looted foodstuff.

“Boko Haram insurgents launched a surprise attack on us this Thursday night at Kaya, which is very close to the military base,” John reportedly said.

“They looted food stuff, carted (them) away with one vehicle and abducted three people.”

Muhammad Yusuf, council chairman, while confirming the incident, said local hunters and vigilante put a resistance and were able to kill one of the insurgents.

“They were repelled by our gallant hunters and vigilante that killed one Boko Haram member, others were injured after a fierce battle, but I am yet to get details, whether there is loss of lives or not,” he reportedly said.

“And minutes later I was called again that there was another attack at Kaya, one kilometer away with Gulak, they abducted three residents in Kaya, and shot an elderly woman on leg. She was rushed to nearby hospital.”

When contacted by TheCable, Othman Abubakar, spokesman of Adamawa police command, promised to speak in “five minutes” but he did not respond to calls made after that.

The attacks are a setback to the fight against insurgency which the current administration sees as one of its major achievements.

TWITTER @thecableng
Copyright 2020 TheCable. All rights reserved. This material, and other digital content on this website, may not be reproduced, published, broadcast, rewritten or redistributed in whole or in part without prior express written permission from TheCable.
Tags
Adamawaboko haram
Advertisement