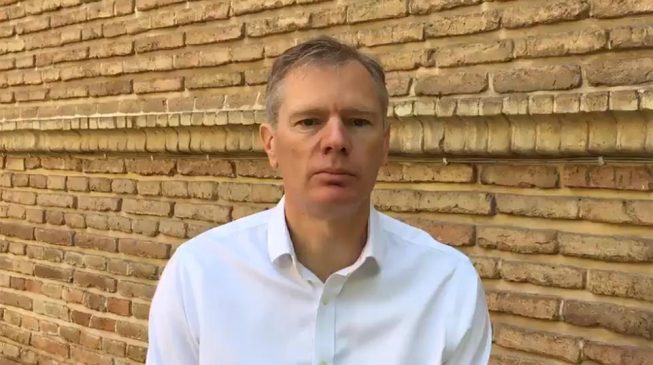 17:21 2020
Print This Article Share it With Friends
👤by Ebunoluwa Olafusi  0 Comments
Advertisement

The British government has summoned Iran’s ambassador over the arrest of Rob Macaire, its envoy in Tehran.

Britain condemned the arrest of the UK ambassador, describing it as a “flagrant violation of international law”.

Macaire was detained briefly on Saturday night after attending a vigil for those who died in the Ukranian passenger plane crash downed by Iran’s military on Wednesday.

The UK ambassador was held for three hours when he stopped at a barbershop for a haircut on his way back to the British embassy.

Iran’s foreign minister had summoned Macaire on Sunday, accusing him of attending an “illegal demonstration” in Tehran.

The foreign ministry also said Macaire was “reminded” that his presence at “illegal gatherings contravened” the Vienna Convention on diplomatic relations.

But Macaire defended his conduct, saying he had attended what was advertised as a vigil for the 176 victims who died in the crash and had left the event as soon as it became a protest.

Commenting on his arrest, Prime Minister Boris Johnson said: “I would say this was an unacceptable breach of the Vienna Convention and it needs to be investigated,” a spokesperson for  was quoted to have said. We are seeking full assurances from the Iranian Government that this will never happen again.”

TWITTER @thecableng
Copyright 2020 TheCable. All rights reserved. This material, and other digital content on this website, may not be reproduced, published, broadcast, rewritten or redistributed in whole or in part without prior express written permission from TheCable.
Tags
arrestIranRob Macaireuk
Advertisement