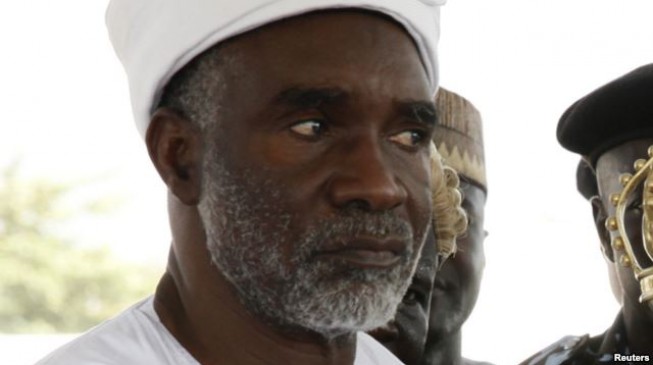 18:14 2014
Print This Article Share it With Friends
👤by News Agency  0 Comments
Advertisement

A federal high court in Lagos on Friday struck out a suit filed by Olukoya Ogungbeje, a lawyer, seeking the reinstatement of impeached Murtala Nyako, governor of Adamawa.

Justice Okon Abang struck out the suit on the grounds that the applicant lacked the locus standi to institute the action.

Abang described the applicant as a meddlesome interloper in affairs that did not concern him.

He said the right to challenge Nyako’s impeachment resides solely in Nyako, as the one impeached and not the applicant.

The judge held that the applicant should have allowed Nyako to carry his own cross and not cry more than the bereaved.

He said that the operative word in the preamble to the fundamental human rights enforcement procedure rules was “may” and not “shall.”

“This implies that not all human rights enforcement cases could not be dismissed for lack of locus standi,” he said.

“It is my considered reasoning that this suit is not a public-interest litigation as alleged by the applicant. It is not an action instituted in the interest of the public.

“It is Nyako that will benefit from any favourable judgment and not the public, and so this matter does not rank among public interest litigation. The applicant cannot cry more than the bereaved and he has no justifiable reason to file this suit.

“As at the time he filed it, it was not established before this court that Nyako was in detention or incapacitated. The applicant can also not depose to an affidavit in support of this application on behalf of Nyako, who is alive. The facts deposed to by the applicant amount to documentary hearsay.”

The judge also pointed out that the suit ought to have been filed in Yola where Nyako was impeached, not in Lagos.

The court further set aside service of the processes in the matter on the defendants, on the ground that it was improperly done.

Respondents in the suit were former acting governor of Adamawa, Umaru Fintiri, Adamawa state house of assembly and Ambrose Mammadi, the acting chief judge of the state.

Others were Buba Kajama, a justice and chairman of the seven-member panel that investigated allegations of gross misconduct against Nyako, INEC and the inspector general of police.

TWITTER @thecableng
Copyright 2019 TheCable. All rights reserved. This material, and other digital content on this website, may not be reproduced, published, broadcast, rewritten or redistributed in whole or in part without prior express written permission from TheCable.
Tags
Adamawa StateBala NgilariMurtala NyakoOlukoya Ogungbeje
Advertisement