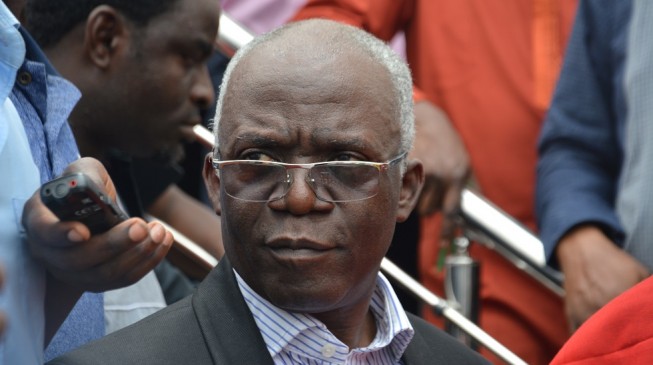 17:36 2017
Print This Article Share it With Friends
👤by Fredrick Nwabufo  0 Comments
Advertisement

Femi Falana, a senior advocate of Nigeria (SAN), has threatened to file a legal action against South Africa at the African Commission on Human and Peoples’ Rights if xenophobic attacks on Nigerians continue.

Nigerians have been victims of hate attacks in South Africa recently.

In a letter to President Jacob Zuma of South Africa, Falana asked the South African authorities to identify the perpetrators of the attacks on Nigerians and prosecute them.

He also demanded compensation for victims of the attacks.

“We are writing to request you to use your leadership position to urgently identify suspected perpetrators of criminal acts and xenophobic attacks against Nigerians and other Africans living in South Africa and to bring them to justice promptly,” the letter read.

“We also urge you to promote and ensure access to justice and the right to effective remedy and reparations to victims.”

He said since 2008, xenophobic violence and other criminal acts had continued to occur across South Africa claiming lives, leaving countless victims injured and robbing them of their property.

Falana lamented that many perpetrators were yet to be brought to justice “while the victims continue to be denied access to justice and their internationally recognised right to an effective remedy and reparations”.

“We believe that it is the failure of your government to bring perpetrators to justice and protect the victims of the xenophobic attacks that has resulted in a vicious cycle of attacks and impunity,” he said.

“These xenophobic attacks and violence are not only human rights violations but also criminal acts, and the persistent failure to proactively address the problems is a serious affront to the rule of law, and directly breaches your government’s international human rights obligations including under the African Charter on Human and Peoples’ Rights, particularly Article 12 on the right to movement.”

He also accused the South African government of mass expulsion of foreign nationals, saying it was against the African Charter on Human and Peoples’ Rights.

“We contend that free movement is crucial for the protection and promo­tion of human rights and fundamental freedoms. Freedom of movement and residence are two sides of the same coin,” he said.

“Article 12 of the Charter guarantees freedom of movement in the broadest sense, and also expressly prohibits mass expulsion, a recurring problem in South Africa under your watch.

“We also argue that the exercise of sovereign power by a state to expel non-nationals who are legally admitted into its territory must fol­low due process, and be manifestly legal and comply with international standards.”

He also urged the Zuma administration “to move swiftly to address the debilitating situation by identifying and arresting the perpetrators and bringing them to justice promptly”, and to publicly commit to providing access to justice and effective remedy to victims.

TWITTER @thecableng
Copyright 2020 TheCable. All rights reserved. This material, and other digital content on this website, may not be reproduced, published, broadcast, rewritten or redistributed in whole or in part without prior express written permission from TheCable.
Tags
femi falanaJacob ZumaSouth Africaxenophobic attacks
Advertisement