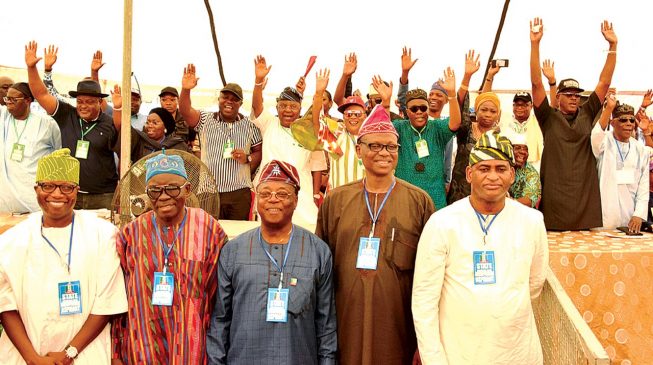 11:14 2018
Print This Article Share it With Friends
👤by Jamilah Nasir  0 Comments
Advertisement

A faction of the Lagos chapter of the All Progressives Congress (APC) has warned the national working committee (NWC) led by Adams Oshiomhole that going ahead with primary elections in the state “will spell doom for the party and expose it to avoidable litigation”.

Going by the schedule of the party, primary elections for the 2019 polls will begin on Wednesday but Fouad Oki, factional chairman of the ruling party in Lagos, said carrying on with the exercise might bring the APC in Lagos to ruins.

In a letter seen by TheCable, Oki asked the NWC to recognise his group as the one with legal party executives.

He accused the national secretariat of the APC of “carrying on with impunity and has, so far, been dealing with the impostors and reengades that emerged from the illegally conducted Congress in Lagos State”.

“We believe you are aware of the fact that the majority of the Party members in Lagos State are aggrieved (justifiably so) with the attitude of the National Body in ensuring the enthronement of illegality, unconstitutionality and impunity as regards Lagos State. In fact, it has been said that the National Executive you lead has engendered the incineration of all that is decent and legal within the Party structure in Lagos State,” the letter read.

“Therefore, there are no truer words than acknowledging that in Lagos State the Party is sitting on a keg of gunpowder. As things are, the conduct of the impending primaries may either diffuse or detonate this keg of gunpowder. In this regard, any misstep in the conduct of primary elections may cause a total reversal of fortunes for the Party in the State. It is our sincere prayer that the Party will not come to ruins under your stewardship. However, this largely depends on the doing of the National body under your leadership.”

The crisis in the Lagos chapter took a new dimension in May when two parallel congresses produced different sets of executive, headed by Oki and Tunde Balogun.

Oki had petitioned the NWC saying the other faction’s congress lacked legal basis because it was conducted based on wards in 57 council areas instead of 20 approved by the Independent National Electoral Commission (INEC).

Subsequently, the leadership of the party under John Oyegun, former national chairman, annulled the congresses and set up a five-man panel to dissect the constitutionality of the two congresses.

The committee had recommended that a “political solution” be reached but Oki said the panel is “nowhere to be found”.

In his letter, he advised the leadership of the party to resolve the issues in the state before holding primaries for the 2019 elections.

Oki said if the primaries would hold, the NWC has to send “impartial personnel” to conduct the exercise and another set to monitor those conducting it.

“We also know that you are aware that as at the time of writing the instant letter, there are, at least, 3 (three) cases in court challenging the validity of the illegally held Ward, Local Government Area and State Congresses held in Lagos State on the basis of 57 Local government Areas and 377 Wards contrary to the provisions of the Constitution of the Federal Republic of Nigeria, the Electoral Act, our extant Party Constitution and the Party Guidelines. For the avoidance of doubt, the cases are,” the letter read.

“Sir, in view of the fact that we remain the members of the only legally elected Party organs in Lagos State, we deem it of utmost importance to draw your attention to the need for the National Body to shed the toga of injustice and take sincere steps geared towards setting our great Party on a path devoid of conflicts and intra-party wrangling. This is particularly so in view of the impending primary elections in preparation for the general elections.

“Sir, as regard the conduct of primaries, rather than carrying on in a manner that can only spell doom for the Party and expose it to avoidable litigation, we advise that the Party must first of all set machinery in motion to have a harmonized and updated membership register at all the wards in Lagos State, at worst, from both sides of the divide.

“We make bold to say that at the moment, our great Party cannot boast of a credible detailed membership register in Lagos State. Without the detailed, updated and genuine membership register, you will agree with us that the Party has prepared a fertile ground for a rigged primary election designed to favour some elements within the Party hierarchy whose primary drive is to destroy the good name of our great Party.

“More importantly, in conducting the primary elections, the National Secretariat cannot afford to accord any recognition to any person purportedly elected through the illegally conducted Ward, Local Government Area and State Congresses that are subject of the aforementioned pending court cases. If this is done, any primary election conducted in Lagos State will be void ab initio; the cause will be illegal. As the saying goes, no legal right can arise from an illegal cause.”

TWITTER @thecableng
Copyright 2020 TheCable. All rights reserved. This material, and other digital content on this website, may not be reproduced, published, broadcast, rewritten or redistributed in whole or in part without prior express written permission from TheCable.
Tags
APCcongressfactionlagosNWC
Advertisement