Magu: Senate rejected me because I’m doing my job well 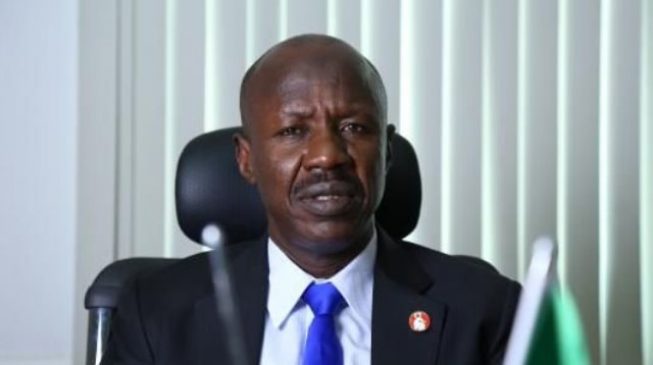 17:04 2018
Print This Article Share it With Friends
👤by Jamilah Nasir  0 Comments
Advertisement

Ibrahim Magu, acting chairman of the Economic and Financial Crimes Commission (EFCC), says the refusal of the senate to confirm him is an indication that he is carrying out his duties judiciously.

On two occasions, the senate refused to confirm Magu as the substantive chairman of the commission, citing a report of the Department of State Services (DSS) which indicted him.

Speaking on Question Time, a programme on Channels Television, the anti-graft czar said he is not deterred by the delay in his confirmation, adding that he is rather encouraged, and would not compromise his duties.

“I don’t think it (non-confirmation) has given the public a cause for concern. I think it is a lot of encouragement. The fact that I am not confirmed shows I am working. Really,” Magu said.

“In the anti-corruption environment, if they rush to confirm you, it means you are not doing your work properly.”

Asked why he is the first to have his confirmation delayed for so long, Magu said, “No problem. Maybe the others are happy. Because a number of the people we are investigating are also in the national assembly.

“I am not completely distracted. It is not an issue. Rather, it gives me courage. You wake up in the morning and see some terrible publications about you. Despite all these, we are determined to go ahead.

“I cannot be distracted with those things. Nobody can purchase me, I cannot compromise what I am doing.”

Magu also said he was not in support of the separation of the  Nigerian Financial Intelligence Unit (NFIU) from the EFCC.

He said the suspension of the NFIU from Ergmont group is being politicised.

“The best financial intelligent units in the world are the ones that are domiciled in law enforcement agencies,” he said.

“Do you think if they put financial intelligence that is totally independent, do you think the banks will listen to it?

“They listen to it because of its affinity to the EFCC.”

TWITTER @thecableng
Copyright 2019 TheCable. All rights reserved. This material, and other digital content on this website, may not be reproduced, published, broadcast, rewritten or redistributed in whole or in part without prior express written permission from TheCable.
Tags
confirmMagusenate
Advertisement