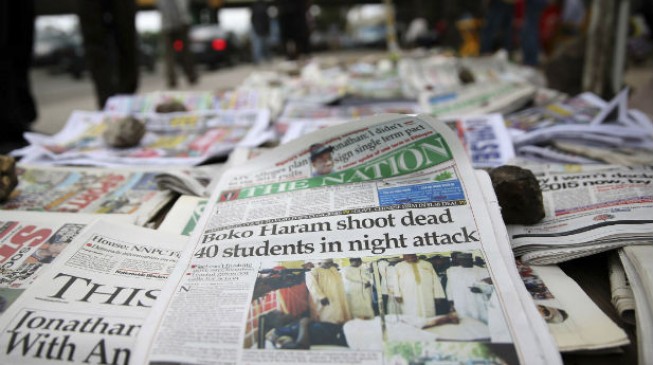 12:24 2014
Print This Article Share it With Friends
👤by Fredrick Nwabufo  0 Comments
Advertisement

Newspaper owners and journalists have condemned the “siege on media” by soldiers, which entered the second day on Saturday.

On Friday, consignment of Leadership and Daily Trust were seized by the soldiers who said they were acting on “orders”. This continued on Saturday, with more newspapers being seized.

Defence headquarters issued a statement on Friday alleging that there was an intelligence report that newspaper vans were being used to convey “security sensitive materials” – supposedly a euphemism for explosives.

The Newspaper Proprietors Association of Nigeria (NPAN) and the Nigerian Union of Journalists (NUJ) have condemned the action of the soldiers.

The Nigeria Guild of Editors (NGE) has also condemned the action on Friday.

The NPAN statement read: “Following the harassment of newspaper vendors/distributors and the seizure of large volumes of newspapers by soldiers who initially targeted the following newspapers: LEADERSHIP, DAILY TRUST, The NATION and PUNCH, but later extended the siege to all major newspapers in the country for the second day today, the Newspaper Proprietors Association of Nigeria (NPAN) held an emergency meeting in Abuja on June 7, 2014 with representatives of vendors and distributors and resolved as follows:

“The NPAN unequivocally condemns this attack of FREE SPEECH by soldiers, in Abuja, Kaduna, Kano, Jos, Maiduguri, Ibadan amongst other cities, claiming to be acting on “orders”. This assault on FREEDOM OF EXPRESSION through the stoppage of distribution of newspapers is inconsistent with the values of any democratic society and the Constitution of The Federal Republic of Nigeria. We therefore call upon the military authorities to lift the siege immediately and call the soldiers to order.

“The NPAN notes the statement issued on Thursday, June 6, by the Director Defence Information, Major General Chris Olukolade, that newspaper distribution channels may have been infiltrated by some persons to transport ‘materials with grave security implications.’ As citizens and businesses, we take the security of our nation very seriously, and especially condemn the continuing daily destruction of human life by a mindless, cruel and criminal insurgency. We have, at our own instance, engaged various security agencies in the past to find ways of dealing with the security challenges we all face. We shall continue to do so. It is, however, deeply troubling that a siege has been laid to the media for two straight days on a suspicion over which no one consulted the NPAN. We stand ready, able and willing to work with all relevant security agencies to ensure the integrity of the newspapers’ distribution process.

“The NPAN wishes to reassure its readers, partners and the public at large, that it will continue to work to promote peace and unity in The Federal Republic of Nigeria, while defending its constitutional role to hold governments at all levels accountable.

“Finally, we do not believe that given the already tense situation in the country the government or any agency acting in its name, will engage in acts that can only stifle free speech and encourage rumors to fester. We, therefore, welcome the assurances to NPAN leadership by senior security officials to end this unnecessary siege.”

The statement was signed by Mr. Nduka Obaigbena, the presidento of NPAN and the editor-in-chief and chairman of THISDAY group.

The NUJ also expressed concern over the seizure of copies of the publications of four national dailies – the Nation, Guardian, Daily Trust and Leadership newspapers by security agents.

President of NUJ, Malam Mohammed Garba, stated the union’s position at a news conference in Abuja on Saturday.

He said that the media was an important stakeholder in the ongoing campaign against insurgency in parts of the country and wondered why it would come under attack from security personnel.

Garba condemned the seizure of the newspapers’ publications, saying that it was not the best way to handle it if there were any issues.

He said: “We have gone through a presentation by the director of defence information, Major-General Chris Olukolade, and we feel that the action of the military was unjustifiable.

“We feel that if there was anything that constituted a security threat and was going to pass through any media organisation, the management of such media organisation should have been notified for the necessary adjustment and correction, rather than total seizure of its publications.

“Unfortunately, this action continued till today and I feel that we must condemn this act.

“Whatever the purported security report is, I don’t think that at this particular point in time there is any media organisation that will publish anything that will jeopardise the unity of Nigeria or bring about discontent in the society.

“Despite the criticism, I think the media has done creditably well to sustain Nigeria’s democracy and maintain societal harmony through its reportage, so I think this same media needs to be insulated from attacks that will undermine its efforts.”

TWITTER @thecableng
Copyright 2020 TheCable. All rights reserved. This material, and other digital content on this website, may not be reproduced, published, broadcast, rewritten or redistributed in whole or in part without prior express written permission from TheCable.
Tags
daily trustguardianleadershipnewspaper proprietor association of nigerianigeria guild of editorsnigerian newspapersnigerian union of journalistspunchsoldiersthe nation
Advertisement