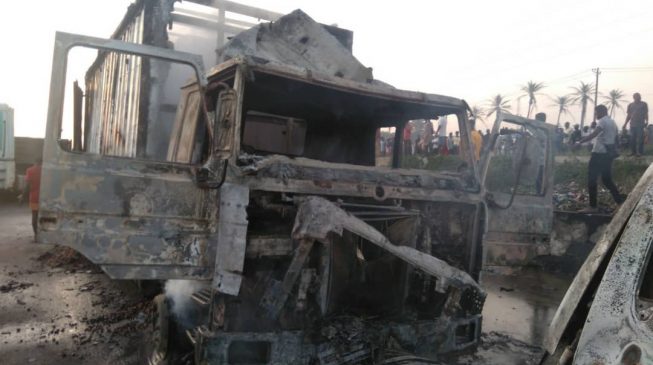 18:37 2018
Print This Article Share it With Friends
👤by Oluwatoyin Bayagbon  0 Comments
Advertisement

At least 10 vehicles reportedly got burnt on Tuesday morning after a tanker explosion occurred around Barracks bus stop along the Lagos-Badagry expressway in Lagos.

The incident occurred as commuters were heading to work in the early hours of the day.

Witnesses said a tanker fully laden with petrol had fallen due to the poor condition of the road, spilling its contents on the roads nearby.

A total of four tankers were affected in the accident and many commercial buses and private vehicles got burnt.

Confirming the incident in a statement, Adesina Tiamiyu, general manager, Lagos State Management Agency (LASEMA), said the agency moved to the scene after a distress call

He said though no live was lost, three buses, one car, and six trucks were burnt as a result of “unsafe practices by inhabitants in the distant environs”.

“Upon arrival of team at the scene of the incident, it was observed that a Tanker with an unknown registration number, fully loaded with 33,000 litres of pms (premium motor spirit or petrol) and a white mini truck carrying electrical appliances had a side collision resulting in a puncture on the tanker’s rear compartment which led to spillage of the pms contents around the area,” the statement read.

“The articulated tanker and trucks were thereafter recovered from the incident scene, however, during the recovery process, the spilled content of the Pms which hitertho spilled into the distant environment ignited fire and went aflame and consequently travelled back to the proximity of the scene resulting in an inferno.”

Tiamiyu said the Lagos State Fire Service, officials of the LASEMA response team, 81 Division Nigeria Army Fire Service, the Nigerian Police and LASTMA (Lagos State Traffic Management Authority) were the emergency responders at the scene of incident and were able to put out the fire with “combined effort.”

In June, nine persons lost their lives and 54 vehicles were engulfed in flames after a petrol tanker exploded around Otedola Bridge on the Lagos-Ibadan expressway.

Three days after the tragic accident, a truck belonging to the Nigerian National Petroleum Corporation (NNPC) was also seen spilling petrol on the Maryland end of Ikorodu road in the state.

TWITTER @thecableng
Copyright 2019 TheCable. All rights reserved. This material, and other digital content on this website, may not be reproduced, published, broadcast, rewritten or redistributed in whole or in part without prior express written permission from TheCable.
Tags
81 Division Nigeria Army Fire ServiceAdesina TiamiyuLagos State Fire ServiceLASEMALASTMANigeria policetanker explosion
Advertisement